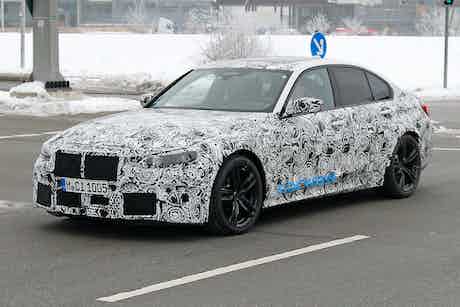 The new BMW M3 has been spotted in Munich. Read on for everything we’ve got on BMW’s latest super saloon.

Even with the extensive body cladding and eye-confusing wrap covering the car in these pictures, it’s clear the new BMW M3 is going to look significantly more aggressive than the BMW 3 Series and mid-performance BMW M340i xDrive it’s based upon. At the front of the car you can see the M3 gets a ground-scraping front bumper complete with huge air vents that help cool the car’s uprated brakes. To the sides of the new M3’s prominent ‘kidney’ grille, you’ll get LED headlights as standard, which can be upgraded to laser LEDs at extra cost.

The changes are even visible in profile, where the M3 gets blistered wheel arches to help accommodate its 20-inch alloy wheels. Their size means BMW can install uprated brakes – in the form of the huge, drilled discs shown in these pictures. But it’s arguably from the back that the M3 looks the most menacing, thanks to the quad exhaust pipes peeking out of the rear bumper. Expect it to feature a petrol particulate filter to help the M3 pass tough new emissions standards, but also – more interestingly – a movable flap that’ll let you flick between a muted exhaust noise to avoid waking the neighbours and a more vigorous howl for the full visceral experience when you’re hammering down your favourite road.

At the business end of that exhaust, you’ll find a 3.0-litre twin-turbocharged straight-six offering about 480hp (up from the current model’s 431hp) and more than 600Nm of torque – getting the M3 from 0-62mph in under four seconds. It’ll be available with xDrive four-wheel drive for the first time, get uprated body stiffening – with the option of a carbon-fibre roof – for a more precise feel in bends and electronic dampers that’ll allow you to soften or stiffen the suspension for added comfort or to stop the car leaning in corners.

You can expect the BMW M3 to be launched at the Frankfurt motor show in September, with a price tag of around £65,000.

Keep up to date with the latest automotive news by signing up to the carwow newsletter at the top of your screen.