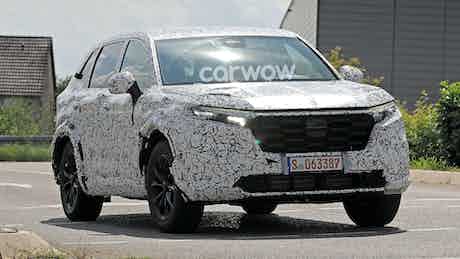 The new Honda CR-V has been spotted out on the road before it goes on sale soon. Check out this all-new hybrid family car here…

A brand-new Honda CR-V is on the way, and these new photos give you your best look yet at the upcoming family SUV.

Honda has confirmed it’ll go on sale in 2023 as a hybrid and plug-in hybrid alternative to the likes of the Skoda Kodiaq and Peugeot 5008.

Judging from this latest set of spy pictures, the next-generation CR-V will look very different from today’s model.

The outgoing CR-V looks quite fussy – especially from the front – but the new car here looks to take inspiration from the brand-new Honda HR-V and Civic.

Check out the new Honda HR-V

Both these models have a more minimalist design with a fuss-free front bumper and neat, thin headlights.

The new Honda CR-V certainly looks boxier than those two cars from the rear, however.

Its roof is flatter and the rear bootlid is more upright with a prominent spoiler sticking out at the top.

There’s a chance the new car will come with similar L-shaped brake lights as the outgoing CR-V, stretching around each lower corner of the rear windscreen and up towards the roof.

Honda has confirmed the new CR-V will come with hybrid and plug-in hybrid options, although hasn’t said exactly what form they’ll take.

There’s a chance one model will come with the same hybrid engine setup from the forthcoming Honda Civic.

This uses a 2.0-litre petrol engine and a pair of electric motors to deliver 184hp. In the Civic hatchback, this engine will return a claimed 56mpg. You can expect this figure to take a slight hit in the larger CR-V, however.

The plug-in hybrid model is expected to pack a stronger punch thanks to a more powerful electric motor and larger battery.

All new Honda CR-Vs are expected to come with a CVT automatic gearbox as standard.

Wondering what the new CR-V’s cabin will look like? Check out the new Honda HR-V’s interior, above. The raised touchscreen, simple dashboard design and minimalist physical buttons are all expected to inspire the new CR-V.

Because the Honda CR-V looks like it’ll be a bit bigger than the car it replaces, its interior should also be a fair bit roomier this time around. There should be plenty of space for passengers in the front and back seats and probably an increase in the already-generous boot space.

You can’t get today’s CR-V as a hybrid with seven seats, but that looks set to change with the new model.

Honda has confirmed it’ll launch the new hybrid and plug-in hybrid CR-V before the end of 2023. Prices will likely rise by a few thousand pounds over the outgoing car, so expect entry-level Honda CR-Vs to set you back around £33,000.

Check out deals on the current Honda CR-V if you can’t wait for this new model. If you’re looking for an easy way to change your car, you can do just that through carwow. You can sell your car and get a great discount on a new one, all from the comfort of your sofa. Tap the button below to get started.