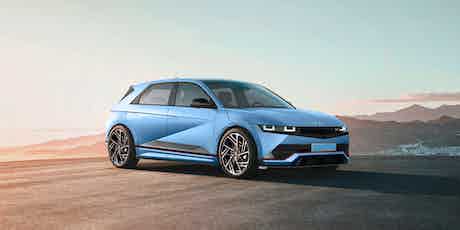 A Hyundai Ioniq 5 N performance model is likely to join the range in the coming months. See the first photos of a prototype car being tested here.

The Hyundai Ioniq 5 will soon spawn a high-performance Ioniq 5 N version that could use parts borrowed from the rapid Kia EV6 GT electric car.

This sporty EV is likely to be even quicker than the Skoda Enyaq vRS and Volkswagen ID4 GTX with power and acceleration figures more closely matching the Tesla Model Y.

Read on to see the first images of a prototype car being tested and exclusive pictures that show what the finished car could look like.

These new photos give you a chance to see the new Hyundai Ioniq 5 N before it’s officially revealed. OK, so Hyundai hasn’t fitted this prototype with any bodywork modifications, but there are some tell-tale signs this is no ordinary electric car…

For starters, check out those alloy wheels. They’re a completely different (probably much lighter) design from the ones on the standard Hyundai Ioniq 5 and the brakes behind them appear larger, too.

Unlike the standard Ioniq 5, which comes with Michelin Pilot Sport tyres, this new prototype is fitted with Pirelli P Zero tyres – the sort of thing you’d usually find on high-performance sports cars and hot hatches.

The whole car appears to sit on lower suspension than the standard Ioniq 5, too.

When the finished Hyundai Ioniq 5 N is revealed, you can expect it to look similar to the rendering, above. It’ll take on typical styling cues of the N performance brand, including the signature Performance Blue paint finish and red trim highlights.

This render imagines the Ioniq 5 N with a more aggressive bumper and larger alloy wheels, though it will retain the eye-catching strakes on the wheel arches.

The back of the car is likely to continue the racier look, with a diffuser possible, though don’t expect any large exhaust exit of course — this is an electric car, after all.

The Ioniq 5 N will quite likely offer a very similar cabin layout to the standard Ioniq 5. This is no bad thing because even the standard Ioniq 5 offers a space age-looking interior with two 12-inch infotainment screens and a clean minimalist feel across the dashboard and door trims.

The lack of a traditional centre console enhances the feeling of spaciousness as does the large panoramic sunroof which should come as standard on the top-spec Hyundai Ioniq 5 N.

Take a look at the Ioniq 5 in this video

The standard Ioniq 5 model will be available with two- or four-wheel drive, and with various motor options producing between 170hp and 306hp, meaning the most powerful cars are a close match for the likes of the Volkswagen ID4 GTX and Skoda Enyaq vRS.

The upcoming Ioniq 5 N will up the ante even further with motor and battery components borrowed from the new Kia EV6 GT.

This means Hyundai’s first high-performance electric car could produce 585hp from a dual-motor setup and boast a 0-60mph time of just 3.5-seconds — matching the EV6 GT. That kind of performance is right in line with the Tesla Model Y Performance, which should come to the UK in 2022.

If the Hyundai Ioniq 5 N does make use of this powerful setup it should also incorporate the electronic limited-slip differential from the Kia EV6 GT as well as an adaptive suspension setup with various settings for more comfortable or sportier driving.

Whereas the standard Ioniq 5 is offered in Standard Range (58kWh) and Long Range (72.6kWh) flavours, the Ioniq 5 N should be available exclusively with the larger battery pack.

In the regular Ioniq 5 this larger battery provides up to 300 miles of range, the Ioniq 5 N is unlikely to match this figure thanks to all that extra power on offer.

The Hyundai Ioniq 5 has just been revealed with prices ranging from just below £37,000 to over £48,000. The Hyundai Ioniq 5 N Performance, however, will likely set you back closer to the £58,000 asking price of the mechanically related Kia EV6 GT. Don’t expect order books to open until 2022, however.