2020 Jaguar F-Type revealed – carwow has all the details 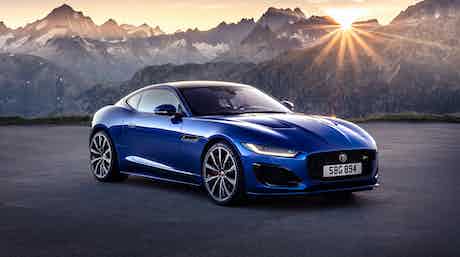 This is the 2020 Jaguar F-Type – Jag’s gorgeous coupe gets more aggressive looks, updated infotainment, a new V8 engine and more powerful R models. Here’s all you need to know…

While this is only an update of the current F-Type, you’ll have no trouble spotting the new car.  Upfront, you get a larger grille, frowning LED headlights, a new bumper and a redesigned bonnet with bigger air vents. At the back, there are new tail lights and a fussier looking bumper. Choose an R-Dynamic model and you get a sportier front bumper while R models (like the car pictured) get glossy black trims that makes the car look more aggressive and 20-inch alloy wheels, the largest available on the F-Type.

This is the first time all F-Types get basic LEDs as standard. Top-of-the-range cars, meanwhile, now get Matrix LEDs. They allow you to use your full beams without blinding oncoming traffic.

The changes made on the inside of the car are less prominent but arguably more useful. That’s because the F-Type now gets a 12-inch infotainment screen in place of a conventional instrument binnacle. That brings the F-Type in line with alternatives such as the Audi RS5 – allowing you to display the car’s sat-nav map behind the steering wheel, right in your line of sight.

Meanwhile, the 10-inch central touchscreen now comes with Apple CarPlay and Android Auto, allowing you to use your Apple or Android smartphone – and their apps for things like navigation and music playback – on the car’s big screen.

In terms of actual design, less has changed. However, the new F-Type gets monochrome stitch patterns on the leather-clad doors and seats, while script on the glovebox release button and seat belt guides commemorate Jaguar’s creation in 1935.

As before, the Jaguar F-Type is available with a choice of four-cylinder and V8 engines.

New to the range is the 450hp V8, which is based on the supercharged 5.0-litre V8 fitted to the old car. It generates 580Nm of torque from 2,500rpm which is enough to get the car from 0-62mph in just 4.4 seconds and onto a top speed of 177mph. You can have the car either with two-wheel drive, for a more challenging drive, or with four-wheel drive which allows the car to get all its power down with minimal fuss, irrelevant of what the weather is doing. Whether you choose two or four-wheel drive, you also get an electronic rear differential which allows the car to send power to whichever tyre has the most grip and, like all F-Types, an eight-speed automatic gearbox.

Top-of-the-range R models, meanwhile, get the same 5.0-litre supercharged V8, but this time tuned to produce  575hp and 700Nm of torque – 25hp and 20Nm more than before. Given the power on offer, you’ll be reassured to hear you get Jag’s four-wheel drive system as standard, which helps get the car from 0-62mph in just 3.5 seconds while its impressive 186mph top speed is actually artificially limited.

It’s not just the engine that marks R models out from the rest of the range, they also get a specially calibrated stability control system and rear differential which can shift power around the wheels to help the car feel more like a sporty rear-wheel drive. Adjustable dampers, which make the F-Type R more comfy on bumpy roads and more controlled in corners, also comes as standard and the rear suspension has also been bolstered to make the car feel more precise in bends.

In terms of braking, you can have your R fitted with fade-resistant carbon ceramic discs with six-pot front and four-pot rear calipers biting down onto discs that are 398 and 380mm in diameter, respectively.

While we’re on the subject, the four-cylinder F-type is the only model not to get a power increase – it still produces 300hp and 400Nm of torque, comes with two-wheel drive as standard, gets from 0-62mph in 5.7 seconds and tops out at 155mph.

Buy an F-Type and you’re guaranteed a fruity exhaust note because all models have a switchable system that gets louder the harder you drive. V8 cars go one step further. They have a button-operated bypass valve so you can make the exhaust as quiet or as loud as you want it. The system includes a Quiet Start mode so 6am departures don’t need to wake your neighbours.