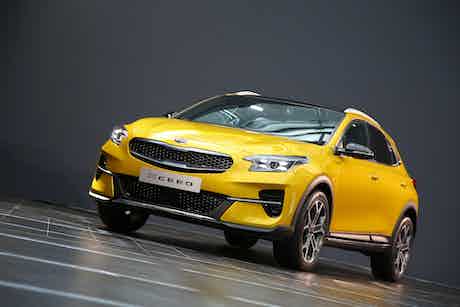 The Kia XCeed is an all-new model that joins the small SUV party as an alternative to the Skoda Kamiq and Hyundai Kona.

The new Kia XCeed is a small family SUV that will be available from September of this year, with prices starting at around £21,000. This makes it around £1,500 dearer than its smaller sibling, the Kia Ceed hatchback. All the same, it’s still less expensive than alternatives such as the Ford Focus Active.

The XCeed has been labelled a ‘CUV’. This stands for Crossover Utility Vehicle. That basically means it is less like a real 4×4 than a true SUV, so you get sleeker, looks and a driving experience that’s more comfortable on winding roads.

The large alloy wheels and a striking bodykit are an indication that the XCeed is aimed at buyers who want a more stylish take on the standard Kia Ceed, but without sacrificing practicality. The XCeed should easily offer enough space for four people and a week’s worth of luggage. Furthermore, there’s more ground clearance than in the Ceed (up to 42mm more, depending on which wheels you go for), plus chunky body cladding that gives it a dash of off-roader flavour flavouring. There are also plastic bumper extensions that feature metal-look ‘skid plates’ like you find on more off-road-focused SUVs.

Thankfully, the XCeed isn’t just a regular Ceed endowed with a few off-road-ish extras. There’s a new grille at the front that is a sportier version of Kia’s signature ‘tiger’ design, while the rakish roofline helps mark the XCeed out from its more conservative hatchback cousin.

The Kia XCeed gets a digital instrument binnacle – a first for Kia – called Supervision. This 12.3-inch screen replaces the traditional dials typically used for the rev counter and speedometer, and is customisable depending on how much you want to display.

Similar to what you would find in an Audi, the design theme of the Supervision cluster varies as you switch modes. In Normal mode, there are fuel efficiency displays, as well as ordinary-looking dials for speed and revs. In Sport mode, the speedo and revs are more prominent, while other information is hidden. There’s also an 8-inch touchscreen infotainment system available, but you can upgrade to a 10-inch system – which is impressive at this price point. It has a split-screen setup, so you can display up to three apps simultaneously. Apple CarPlay and Android Auto come as standard.

A real advantage of the new system, though, is the chance to see other information such as turn-by-turn navigation directions, or info on phone calls, music, fuel economy, range and safety features. Every time you switch off the engine, you’ll also see a readout that tells you statistics for your most recent trip: distance, time travelled, fuel economy and fuel range.

Top-spec versions of the Kia XCeed can get heated and cooled front seats, heated rear seats, a sunroof, wireless charging, LED headlights, alloy wheels, dual-zone air-conditioning, heated door mirrors, a powered tailgate and a JBL Premium sound system. There is a safety kit that allows the car to steer, brake and accelerate itself, park itself, and switch on its full beam headlights by itself.

Engine choice includes a 1.0-litre turbo petrol with 120hp or a 1.4-litre turbo petrol with 140hp. If you’re looking for a little extra fuel economy, there’s a pair of 1.6-litre turbo diesels to choose from, with 115hp or 136hp. The lowest-powered petrol comes with a six-speed manual only; the rest are available with a seven-speed auto. Sadly, what you can’t get is four-wheel drive. Yes, the XCeed, despite its SUV looks, is two-wheel drive only. Kia hasn’t confirmed any official fuel economy figures yet, but the XCeed’s engines are available in other cars in its manufacturer’s range, so expect the petrols to return circa 45mpg, while the diesels should be capable of more than 60.

48V mild hybrid and plug-in hybrid variants of the Kia XCeed will go on sale next year. Kia is keeping tight-lipped about these models but the technology is already in its existing cars. So, the plug-in should be able to provide you with around 35 miles of zero-emission, all-electric driving. Meanwhile, when you use the petrol engine and electric motor together, an economy of nearly 200mpg could very well be possible.

Bookmark this page to stay up to date on the Kia XCeed SUV.