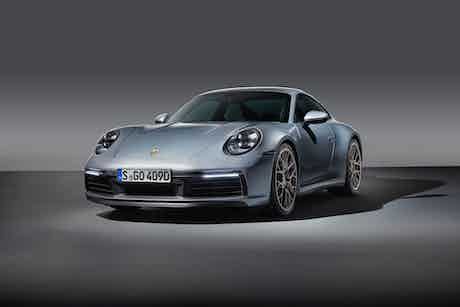 This is the 2019 Porsche 911 (992): the latest version of the company’s iconic sports car. It’s set to be even quicker than before, but will also get a suite of tech to make the car easier to live with day-to-day. The latter point is key to the 911’s appeal, especially next to more temperamental alternatives from the likes of Ferrari and Maserati.

Initially, it appears that Porsche took the prior 911 and then pressed Ctrl-C and Ctrl-V to create the 992. However, the car has been rebuilt from the ground-up, featuring revised LED headlights and rear light bar, exhaust pipes integrated into the back bumper and new bonnet creases. The 2019 Porsche 911 (992) is also wider than its predecessor, complete with newly flared wheel arches.

The 911 has always aimed to provide a fun and rewarding drive. The 992 is no different. Every available model will get the option of agile four-wheel steering. The steering’s also slightly quicker – five percent more direct than the old model’s. Adjustable suspension – which lets you choose from a cosseting ride on bumpy roads or more control on twisty roads – will also be available.

With its rear-engined layout, the 2019 Porsche 911 (992) will offer excellent dry weather traction, while a new ‘Wet’ mode in the car’s drive select should improve the 911’s wet-weather handling. It warns you when the road is slippery and can set the car up to give you as much grip as possible.

The 2019 Porsche 911 (992) has a 3.0-litre flat six twin-turbocharged engine. The 385hp Carrera – which has 15hp more than its predecessor – kicks off the range. Performance figures for the 992S have been confirmed by Porsche. It has 450hp, while it can power the car from 0-62mph in 3.7 seconds. The four-wheel drive Carrera 4S is slightly quicker at 3.6 seconds, but both models will still hit 190mph flat-out.  Drive the car reasonably sensibly and you can still expect a solid fuel economy of 30mpg – better than you’ll get from most cars offering this level of performance.

If you want to bolster the 2019 Porsche 911 (992)’s environmental credentials, you’ll be able to download the Porsche Impact app, which can suggest a variety of climate projects – from hydro to solar and forest conversation – to help offset the environmental impact of driving the car.

Old meets new inside the 2019 Porsche 911 (992). Its large central rev counter, situated directly behind the steering wheel, would fit well in the 911s of the 1960s, while those digital displays around it are far more 21st-century and will allow you to switch between a variety of functions. Practicality will be high on the 911’s agenda – well, for a sports car, at least. Its front seats will have the room and adjustment needed to accommodate a wide variety of people. Although the back seats will only be suitable for kids, the 911’s boot (found underneath the bonnet) will offer a surprising amount of luggage space when compared to supercar alternatives.

The 2019 Porsche 911 (992) is set to be the safest 911 yet. As standard, it will include automatic emergency braking, with additional options including adaptive cruise control – which can automatically brake or accelerate the car on the motorway – and night vision that displays infrared images of people and animals on the infotainment screen.

A convertible variant of the 2019 Porsche 911 (992) – the Cabrio – is expected to land in the middle of the year. Despite boasting a twin-turbocharged, 3.0-litre engine capable of 450bhp, extra chassis stiffening will make it a little slower off the line than the 992 coupes. But the classic 911 six-cylinder roar remains, now with the added perk of that retractable soft-top roof. Prices are expected to start at £89,000. We’ll be driving the 2019 Porsche 911 (992) later this month. Bookmark this page or sign up to the carwow newsletter at the top of your screen to read the review.

A brilliant sports car that easily slots into your daily routine
9/10
£89,400 - £176,870
RRP
Read review Compare offers
Like this article? Share it with others!