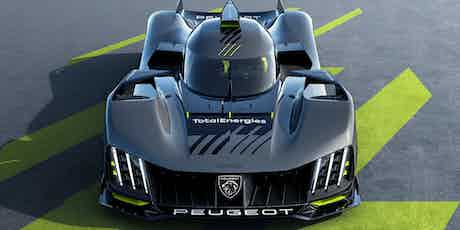 Peugeot has revealed the car it will use on its return to the 24 Hours of Le Mans next year. Read on for full details.

The low-slung hypercar you see here is Peugeot’s entrant for the FIA World Endurance Championship in 2022, the 9X8. Its name is derived from legendary Peugeot race cars such as the 905 which won the Le Mans 24 Hours in 1992 and 1993.

It will be joining cars like the Toyota GR Super Sport when it reaches the grid in 2022.

Along with its claw-like headlight and taillight design, the 9X8 also features an illuminated lion’s head logo on its nose and sides. While the deep air intakes and large side scoops are standard hypercar fare, the lack of a massive rear wing is possibly the most noticeable design element.

Peugeot’s designers have managed to do away with the wing while still retaining the required downforce and aerodynamic efficiency, Stellantis Motorsport Director Jean-Marc Finot says that they intend to keep the secrets of this innovation to themselves for as long as possible.

The exterior features the Selenium Grey and contrasting Kryptonite acid green/yellow highlights that are the hallmarks of the Peugeot Sport Engineered line and can be seen on models like the new 508.

Most purpose-built race cars have a rather minimalist interior, with a racing seat, roll cage and a wall of dials and digital displays dominating the cabin. No official images are available yet, but Peugeot says that it will take a new approach to the interior design, implementing its i-Cockpit styling language to differentiate the 9X8 from other race cars.

The powertrain consists of a rear-mounted 2.6-litre twin-turbo V6 producing 680hp as well as a 200kW (272hp) front-mounted electric motor. A 900-volt battery pack and seven-speed sequential gearbox are also in the final stages of development.

As per racing regulations, the total output of both power sources will be limited to 670hp via various software and hardware measures. This will help ensure close racing on track while still giving engineers plenty of leeway for innovative powertrain technologies.