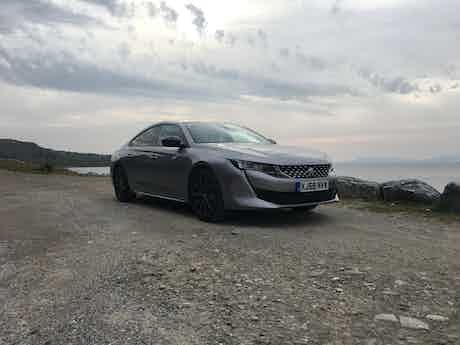 This month, our Peugeot 508 Fastback was in the very capable (and critical) hands of our video content editor, Matt Rigby. Was he enamoured? Find out below…

The design of our Peugeot 508 Fastback is almost the perfect metaphor for the car. From some angles, and in the right kind of light, it looks awesome: crisply shaped, tautly muscled, seductively aggressive. To my eyes, at least, it looks better than anything claiming to be a medium-sized family car has any right to be.

Most of the time.

Catch it in a bad light – on a dull, unlovely London autumn morning, say – and it looks flat and uninteresting; a parody of sporty styling rather than the real thing. Part of the problem is the grey paintwork offset by even greyer wheels. In poor lights or when the car’s less than immaculately clean, it simply doesn’t pop. I’m sure if you were cruising around some hairpins on the Cote D’Azur, Mediterranean sunlight bouncing off the car’s flanks, it would look unfailingly beautiful. In suburban London? Not so much.

And it’s that sometimes-great-sometimes-very-much-not vibe that characterises life with the 508. My first experience with it was a slog across London on a dark and rainy drive home. And it impressed. It was smooth and comfortable, and a quiet, relaxing companion. But that small, sporty steering wheel and excitingly angular dashboard promised a sporty experience when I got it out of the confines of the capital that, sadly never really materialised. Other carwow team members have already written about how the engine and gearbox don’t quite seem to work together as harmoniously as you’d hope – and they aren’t wrong.

It’s the same sense of high hopes not quite met with the front seat comfort, the rear passenger space and the boot space. Although I will say that being able to wave your foot under the rear bumper to open the boot is a real help when your arms are full of a huge tow rope.

As a longtime fan of stylish French family cars, I desperately want to love the 508, but I can’t. Not quite.

I’ve been looking back and looking forward with the Peugeot 508 recently. Literally. You see, with such a wet start to last month, the car’s lovely swoopy lines have highlighted a particular issue – seeing out of the rear window.

Even Peugeot describes the car as having a hatchback-style tailgate, but unlike many modern hatchbacks, you won’t find a rear wiper on the 508. In wet weather visibility through the small rear window isn’t the clearest and it could do with the odd flick of a rear wiper.  It’s no dealbreaker – it’s just you look for a rear wiper in that first journey in the wet, and it’s not there.

You sit down low, you grip the small steering wheel and you feel like you’re in a racy coupe. But the engine and gearbox set-up is tuned to be a relaxing rather than a sporty drive. You can use the paddles on the steering wheel to change gear, but they are not that quick and it’s easier just to sit back and let the auto do its thing. There is a button to switch things into Sports mode… but overall the 508 is simply better at being a cruiser than a bruiser.

It looks sporty – but just doesn’t feel it.

All show, no go? That’s maybe a bit harsh. If you can live with the fact that it looks sporty but isn’t really, then you’ll get on just fine with a 508. If you want a car to fulfill those expectations then you may want to look elsewhere.

And just a final word on fuel economy. After initial long runs, the 508 has been mainly used for trips around town recently – ferrying the kids about, nipping to the supermarket and the like. These short, sharp journeys could have sent fuel economy tumbling but it’s actually been OK – a couple of miles fewer per gallon but not enough to make much of a difference.

Owning a car is both a rational and an emotional experience so let’s start with the rational features of the Peugeot 508 in its first real tough test – taking a family of four on a long schlep from leafy Surrey to the wild Highlands.

Does the Fastback’s swoopy roofline compromise practicality? Not on our holiday experience. We had a couple of cabin suitcases and a whole bunch of soft bags and rucksacks for our week away, yet we still had room to spare. I even managed to make use of the smart electric tailgate feature when loading up the car. If you’re carrying a couple of suitcases, just a few well-placed waggles of the foot and the boot lid pops up for you. An impressive magic trick to wow my eight-year old daughter at the very least…

But the boot wasn’t what impressed me most – it was the combination of the car’s fuel economy and range. With a 62-litre tank and +40mpg fuel economy I could drive the 500 miles north without having to fill up at expensive motorway service stations. When the low fuel warning light did come on, the sat-nav automatically fired up to divert to the nearest petrol station if necessary, which was a helpful feature.

And the fuel economy wasn’t simply confined to travelling at a constant speed on the motorway – on fast Highland A-roads and on the twisty, hilly single track roads, the combined fuel economy stayed above 40mpg.

But on to the emotional side. Looks are a subjective thing – what looks great to you could look like a dog’s dinner to the next person, but the Peugeot 508’s looks are definitely striking and you will find people staring at the car when you drive it.

First night I took the car home, my next-door neighbour was straight out, asking about the Peugeot. He’d just become a dad for the second time but was more interested in having a look around the car than telling me about his new baby.

And that kind of experience wasn’t a one-off. I was filling the car up at the local supermarket fuel station when some random bloke came across wanting to have a closer look at the car.

He thought the Peugeot 508 looked stunning and simply wanted to say that to me.

Cars can do that.

You can have all the practical features you like, but some cars simply appeal more to the emotional side than others and the Peugeot is certainly is one of those.

You won’t see as many large saloon cars on the roads these days – you can thank the ever-growing popularity of SUVs for that – but Peugeot reckons there’s still money to be made from a low-slung four-door which focuses its efforts on those in the front seats. During our time with this plucky VW Passat and Mazda 6 alternative, we hope to find out whether the French firm is on to a winner.

Our car is a high-spec GT Line model with a few optional extras added for good measure. There’s the subtle – or dull, depending on your outlook – £525 cumulus grey paint, a £400 electric-opening bootlid and a £590 Focal stereo which push the price of this 180hp 1.6-litre petrol model to £31,239 – about the same as a 150hp petrol Audi A4 in Sport guise.

You needn’t splash out quite so much to get your hands on a 508, however. Even entry-level Active versions (which cost from around £8,000 less than our car) come with 17-inch alloy wheels, dual-zone air conditioning and an 8-inch touchscreen infotainment system with sat-nav and smartphone mirroring.

The latter contributes to the 508 looking like no other saloon on the road – arguably even more so in the dark with its huge fang-like headlights illuminated. Even our grey car on a pretty miserable grey day managed to garner a few admiring glances on a quick 200-mile round trip to Leicestershire.

It doesn’t just look good from the outside, you get to enjoy a few slick design features from the driver’s seat too, including the Peugeot 508’s i-cockpit which pairs a small, oddly square, steering wheel with a raised digital driver’s display. This layout feels a little strange in Peugeot’s taller 3008 and 5008 SUVs, but it feels completely intuitive in the 508.

The piano-key shortcut buttons for the infotainment system are another lovely touch, but the system itself isn’t a patch on the much slicker units you get in the likes of the VW Passat. Having to use the touchscreen to adjust the temperature is a particularly bug-bear, but at least the smartphone mirroring worked perfectly so we could circumvent some of the Peugeot’s more peculiar menus with our smartphone’s apps.

Our GT-Line car also comes with a drive mode selector so we can choose from sporty, comfortable or more economical modes. Having spent most of our time cruising up and down the M1, we’ve only tested the waters of ‘Eco’ mode so far, in which the 1.6-litre petrol engine is smooth, quiet and still relatively punchy.

With a gentle foot on the accelerator and more than 700 (mostly motorway) miles under our belt, we’ve managed 38mpg – very close to Peugeot’s claimed 41.8mpg. The eight-speed automatic gearbox is ideal for long journeys too, but it can be a little jerky around town.

So, the undeniably eye-catching Peugeot 508 isn’t without fault, but so far it’s made a stylish and comfortable motorway cruiser which hasn’t cost a great deal to run. Stay tuned for future reports where we’ll find out just what it’ll be like to live with. Keep up to date with all the latest car news by signing up to the carwow newsletter at the top of your screen.