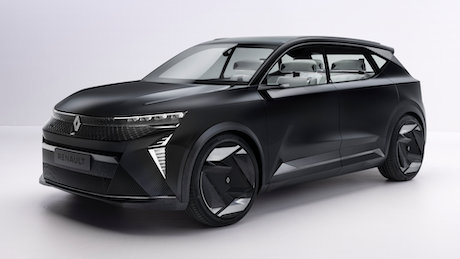 This is the Renault Scenic Vision concept – a high-tech hydrogen-electric hybrid SUV that shows what future zero-emissions Renault cars could look like. Read on for full details…

This is the Renault Scenic Vision concept. It previews the sort of tech Renault will use in future production cars as it aims to go electric-only by 2030.

Its design takes inspiration from recent Renault EVs, such as the Megane, and previews the direction the French manufacturer is heading with its next-generation Scenic people-carrier.

The current Renault Scenic is a curvy people carrier but this new Scenic concept looks much more like a modern-day SUV thanks to its long bonnet, more upright windscreen and flat roof.

Look past the fairly conventional silhouette and you’ll spot plenty of futuristic details.

The wheel trims look sharp enough to make breadcrumbs out of unsuspecting kerbs, for instance, and the textured patterns on the wheel arches are an all-new feature.

The Renault badge at the rear is made from translucent plastic and can light up in various colours – including red to act as a central brake light.

If you thought the new Scenic concept’s interior was a bit left-field, wait ’til you check out the cabin…

There’s no huge central touchscreen like you get in some modern EVs. Instead, you get a full-width digital display beneath the windscreen and four moveable tiles next to the steering wheel.

The seats come with unusual off-centre supports for the headrests and built-in seatbelts. This integrated design isn’t just for show – the concept’s pillarless cabin design leaves nowhere else to secure them.

In contrast to today’s five-seat Renault Scenic and seven-seat Grand Scenic, the new concept comes with only two back seats. Expect a future production car to come with a more conventional three-seat rear bench instead.

Another feature that might not necessarily reach production (anytime soon) is the concept’s innovative hybrid drive system.

Unlike a conventional hybrid (which uses a petrol or diesel engine and an electric motor powered by a small battery pack) this Renault uses a hydrogen fuel cell to provide electricity for its 218hp electric motor that’s been lifted from the new Renault Megane electric car.

The Scenic still has a battery (40kWh) but its 15kW fuel cell is able to recharge this unit on the move. Renault says you can refill the hydrogen tank in five minutes – if you can find a filling station. As of early 2022, there are only 15 in the UK…

With a fully charged battery and a full tank of hydrogen, Renault says the Scenic concept can drive for almost 500 miles. That’s even further than the longest-range Tesla Model S and Mercedes EQS.

Renault is using the Scenic concept to show off how it’ll use recycled materials in future production cars. The concept has been made using more than 70% renewable materials and is 95% recyclable. This includes its battery – a part of modern electric cars that is usually very expensive and difficult to repurpose.

Overall, Renault claims that its hard work means that a production car built using the same techniques and materials as this Scenic concept could have a carbon footprint 75% smaller than that of a conventional electric car.

The Renault Scenic Vision is just a concept car, meaning it won’t go into production but it does show you what future Renault EVs could look like.

The ‘Scenic’ name makes it very likely this concept will inspire the next generation of Renault’s practical people carrier.

Today’s Scenic has been around since 2016 and is due to be replaced in the next few years. You may have to wait until 2023 or 2024 before a production car inspired by this concept hits the roads.

Can’t wait for the new Renault Scenic? Check out the latest electric car deals available now. If you’re ready to change your car now, you can also now sell your car through carwow. Tap the button below to find out how easy it is.