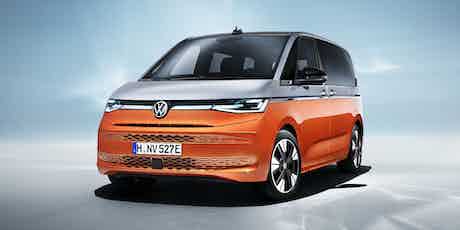 The Volkswagen Caravelle replacement, or T7 Multivan, is on sale now. It’s available with diesel and (for the first time) a plug-in hybrid engine option, and will soon be offered as a practical California camper van.

Volkswagen has revealed the new T7 Multivan – or Caravelle as it’s known in the UK.

This new people carrier comes with a revamped interior and a range of engines including a new plug-in hybrid setup, and will soon be offered as a California camper van, as shown in exclusive rendered images, below.

This new T7 van is built using the same underpinnings as the new Golf (albeit stretched significantly) and though narrower and lower than the outgoing model, is said to have just as much interior space.

The new Volkswagen T7 Multivan is on sale now, with prices starting from £43,160. Three trim levels are available from launch: Life, Style and Energetic. All three are also available in two different lengths depending on how much space you need.

Entry level Life versions of the T7 Multivan start at £43,160 with a 1.5-litre petrol engine. This gets you you get 16-inch alloy wheels, seven seats, a digital drivers display, a 10-inch touchscreen infotainment system and lane keeping assist.

Step up to style trim, and you get 17-inch alloy wheels, LED matrix headlights, park assist, electric sliding doors and an electric tailgate. All this will set you back £58,130 with a 2.0-litre petrol engine.

This is the special launch edition of the Multivan. Starting at £59,515, it’s only available with a 1.4-litre petrol hybrid engine. Standard equipment includes a Harmon Kardon sound system, privacy glass and a panoramic glass roof.

The new Multivan is also now available with a 2.0-litre diesel engine with 150hp. This engine comes with a seven-speed automatic gearbox as standard and a 58-litre fuel tank that’ll let you drive for up to 620 miles between refuelling stops.

The new Volkswagen T7 Caravelle replacement has the same boxy silhouette as the outgoing van, but its new bumpers and full-width daytime running light (just like on the new VW ID3 electric car) mean it looks much more modern.

As with the old model, you can get the new T7 Multivan with a range of two-tone paint finishes. The largest alloy wheels you’ll be able to get are 19 inches across.

The new VW T7’s interior comes with individual seats rather than benches and has a flat floor that extends all the way through the van so everyone shares the same amount of foot space.

Being a van-based MPV like Citroen e-Spacetourer, you also get a great seating position and good all-round visibility.

Check out deals on the Citroen e-Spacetourer

This also means VW could fit sliding rails for all the back seats that let you customise the interior layout.

With all the seats in place you’ll have access to 469 litres of boot space, but take them out (each one is 25% lighter than in the old car to make this easier) and you get more than 4,000 litres of space to play with.

There’s also a new central table that can be moved around between the passenger seats. It can form part of a centre console or armrest for the front seats but it can slide back and become a useful table for passengers in the back.

VW says there’s more headroom inside the new T7 Multivan than before if the optional sunroof is installed, and it’s the same as the previous model if not.

The new VW T7 Multivan doesn’t just share the Volkswagen Golf’s underpinnings – it gets some of that car’s infotainment tech too, including a pair of 10-inch infotainment displays.

The latest T7 Multivan will also form the base for an all-new Volkswagen California camper van.

Don’t expect this to look radically different from the standard T7 Multivan, though. As these exclusive renderings show, it’ll share the same headlights, bumpers and optional two-tone paint scheme, but will probably benefit from a new pop-up roof and side-mounted awning.

Volkswagen may fit the new T7 California with the same plug-in hybrid system as the standard T7 Multivan.

The new California’s interior will likely share its basic layout with that of the outgoing California, so there’ll be a kitchen area, folding and sliding seats that turn into a bed area, and rotating captain’s-chair-style front seats.

You can get the new Multivan with a range of petrol, diesel and hybrid engines. The entry-level van gets a 136hp 1.5-litre petrol engine, but there’s also a 204hp 2.0-litre petrol model and a 2.0-litre diesel engine with 150hp.

New for this T7 model is a plug-in hybrid engine. This uses a 150hp 1.4-litre petrol engine along with an electric motor to produce a total of 218hp.

This model will be able to travel around 30 miles using the power of its 13kWh battery alone. The hybrid model comes with a six-speed automatic gearbox.

VW has already confirmed that an electric people carrier based on its ID Buzz concept is on the way, so we don’t expect to see an electric-only version of the new Multivan.

Despite looking very similar to the old van, the new T7 is more aerodynamic, which helps boost fuel economy and reduce the amount of noise you’ll hear in the cabin while driving.

Can’t wait for the new Volkswagen T7 Multivan? Check out deals on the Volkswagen Touran. Or, if you can’t decide which car is best for you, tap the button below to get help finding your ideal model.