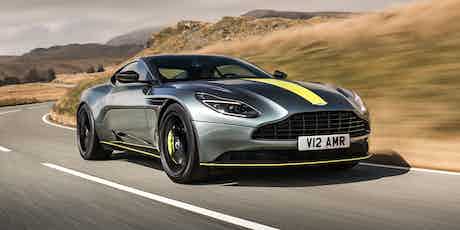 Aston Martin has revealed a new flagship version of its DB11 coupe. Named the AMR – standing for Aston Martin Racing – this new model comes with sportier styling, a flasher interior and more power than the, er, ‘measly’ 608hp standard model.

If this super-quick gran tourer doesn’t take your fancy, read our list of the best luxury cars and best sports cars with four seats for a selection of alternatives. Once you’ve picked your favourite, click ‘login’ in the top-right-hand corner to sign in and configure a brand-new car, or browse our extensive range of pre-reg, ex-demo, new, nearly new and used in-stock cars.

The AMR’s optional two-tone paint means you won’t have trouble finding the DB11 AMR in a crowded carpark – even one full of other Aston Martin DB11s. It gives the AMR a glossy dark green finish while the bonnet, side skirts and brake callipers are treated to highlights in lurid lime. You also get plenty of exposed carbon fibre, while the 20-inch alloy wheels, grille, exhaust tips and lower halves of the bumpers are painted black.

If that isn’t enough, Aston Martin can also kit your AMR out with a carbon-fibre retractable spoiler, carbon fibre exhaust tips and a carbon fibre engine cover but that lot will cost you (rather a lot) extra.

Unfortunately, an uprated exhaust means Plod will hear you before they see you, but at least the tweaked, faster-shifting gearbox and stiffer suspension means the chances of them catching are basically zero.

Far from a boy racer mobile though, the AMR offers the very epitome of luxury thanks to its of two-tone leather sports seats and a flat-bottomed steering wheel that add a sporty twist to the leather and Alcantara upholstery carried over from the standard DB11.