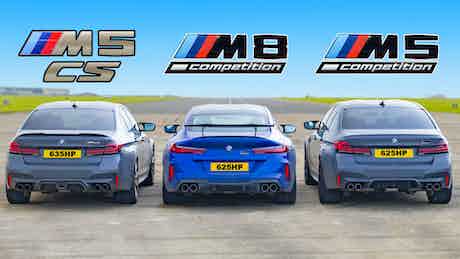 Well, aside from appearing in today’s carwow drag race, quite a lot.

All three share mechanical bits. That includes a 4.4-litre twin-turbocharged engine, an eight-speed dual-clutch automatic gearbox and an all-wheel-drive system.

With the BMW M8 Competition and M5 Competition, that engine kicks out 625hp and 750Nm of torque.

The M5 CS gets a little more oomph though, with 635hp — though retains the 750Nm of torque.

It gets some weight-saving measures though that makes it the lightest of the three here, coming in at 1,825kg, while the normal M5 Competition comes in at 1,895kg.

Though both are a lot lighter than the BMW M8 Competition – here in four-door Gran Coupe form — which weighs 1,980kg.

On paper then, you’d guess the M5 CS beats the lot. Will that come to fruition, though? You’ll need to watch to find out…