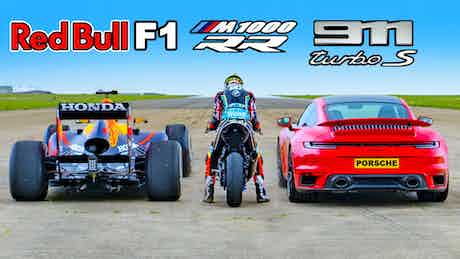 Lining up here is the Red Bull RB7 2011 championship-winning Formula One car, a BMW M1000RR — a truly ridiculous road bike — and the Porsche 911 Turbo S which you’ll likely be familiar with if you’re a regular to a carwow drag.

Let’s kick off with the Red Bull’s stats. Powered by a 2.4-litre naturally-aspirated V8, it produces 750hp sent purely to the rear wheels through a seven-speed sequential gearbox.

It’s not sending that power through any regular tyres though, rather specially-developed, ultra-sticky Pirelli P-Zeros.

It’s pretty light too, coming in at just 650kg. Albeit that’s really porky compared to the BMW M1000RR.

See, that weighs just 192kg. Minus the rider, obviously, but then he’s no regular guy with a bike licence. We’ll let you find out who for yourself in the video.

Powering the M1000RR is a 999cc four-cylinder engine, good for 212hp and 113Nm, sent to the rear axle through a six-speed gearbox. But remember that’s in something that weighs about the same as an adult lion.

Then we get to the Porsche 911 Turbo S. It uses a 3.8-litre twin-turbocharged flat-six engine, kicking out 650hp and 800Nm to all four wheels through an eight-speed dual-clutch automatic gearbox.

So, how does it all pan out? Well, you better watch to find out…