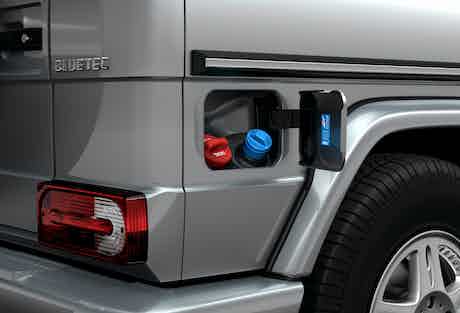 If you’re thinking of buying a diesel car built after 2015, there’s a good chance it will use AdBlue. But, what is AdBlue and why does your car need it? This handy guide will walk you through everything you need to know.

What does AdBlue do?

AdBlue is a non-toxic liquid that’s injected into the exhaust system of a diesel car to help clean up the emissions. A lot of manufacturers fit their cars with AdBlue systems to comply with Euro 6 emissions standards.

So what is AdBlue made of exactly? Well, it contains mostly water and urea (yes, the stuff in pee), which is used as part of selective catalytic reduction (SCR).

Sales of petrol and diesel cars to be banned by 2030

AdBlue has been proven very effective at reducing NOx emissions from diesel cars. In 2017, the University of Leeds conducted a study that showed a 1.4-litre diesel Volkswagen Polo with no AdBlue system produced the same amount of nitrogen dioxide as a 13-litre diesel truck with an AdBlue system fitted.

Which cars use AdBlue?

Only diesel cars have AdBlue systems fitted because they produce a lot more nitrous oxide than petrol models. Many diesel cars built after September 2015 will use AdBlue, as it’s used to reduce NOx emissions and comply with the Euro 6 emissions standards.

When does AdBlue need topping up?

Nearly all cars which require AdBlue will have some sort of warning on the dashboard when you are getting low, and most will tell you how many more miles you can drive before it runs out.

How long your AdBlue lasts will depend on a few factors such as the size of the tank, your car’s fuel consumption and your driving style. As a rough estimate, you should get through around a litre for every 600 miles you drive.

Where can I top up my car’s AdBlue?

Topping up your AdBlue is something that you can do yourself at home. You can buy it in five-litre containers from most garages and motor factors.

When buying AdBlue, you want to check it’s the correct specification so it doesn’t damage the SCR catalyst (which is expensive to replace). Look for a code beginning with ISO 22241 on the packaging.

In most cases, the filler will be under the fuel door and will be a blue cap next to where you put diesel in. Consult your owner’s manual if you can’t find it. You can’t just add a little bit of AdBlue, as it won’t register on the gauge. When you top it up it has to be filled completely. AdBlue also won’t keep for later if you don’t use the whole bottle.

If you don’t fancy topping the AdBlue up yourself, you can get a mechanic or main dealer to do it for you. If it’s low when you take the car in for a service the dealer will often top it up as well.

How much does AdBlue cost?

The cost of AdBlue can vary. However, in most cases, you can find a five-litre bottle for around £10.

Some petrol stations also have AdBlue pumps, however, these are rare and much more expensive. Having it done at a mechanic or main dealer will also cost a lot more, so it’s best to stick to doing it yourself where you can.

What happens if you run out of AdBlue?

As we’ve mentioned, most cars will warn you when the AdBlue level is getting low, and you mustn’t ignore these messages.

If you let the AdBlue tank run completely dry, your car will likely go into ‘limp-home mode’. This will severely limit performance in an attempt to reduce emissions and only allow you to get off the road to a safe location.

Once you’ve stopped, most cars won’t then allow you to restart the engine until you’ve filled up the AdBlue. It’s therefore definitely worth spending five minutes to make sure it’s topped up.

What is AdBlue made of?

AdBlue is mainly made up of water and urea (similar to the stuff found in urine.) The urea found in AdBlue is very pure and the water is demineralised to make it cleaner than tap water.

Is AdBlue toxic, corrosive or flammable?

No, AdBlue is not toxic, corrosive or flammable. It is not considered a hazardous liquid and doesn’t pose much danger to humans.

Is all AdBlue the same?

While most AdBlue is the same, it’s worth checking the code on the packaging starts with ISO 22241. This ensures it’s the correct specification for the car and it won’t cause damage to the SCR catalyst.

How much AdBlue does my car need?

The size of the AdBlue tank varies from car to car. To find out how much AdBlue your car takes, consult the owner’s manual.

How long does AdBlue last?

Again, this will depend on a few factors including the size of your AdBlue tank, your car’s fuel consumption and your driving style. As a rough guide, one litre should last around 600 miles.

What does an AdBlue warning light mean?

Most of the time, an AdBlue warning light will mean you’re running low and need to top it up. You shouldn’t ignore this as running out can cause the car to not start.

If you fill up the AdBlue and the warning light doesn’t go out, there could be a fault with the system. You should arrange to have your car looked at by a professional as soon as possible.

Looking to get a great deal on your next car? Check out carwow’s configurator to build your ideal car and get great offers back from our trusted dealers. Not sure what you want? click the button below to get help choosing the ideal model for you.