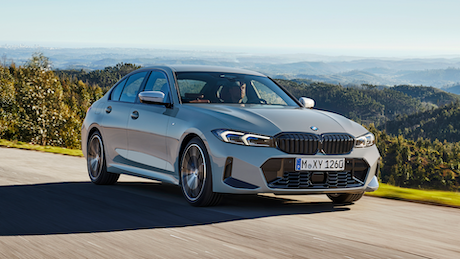 This is the new, updated BMW 3 Series. It might look familiar, but it comes with lots of exciting new tech and a new range of engines. Read on for full details.

The new BMW 3 Series is on sale now. It comes with a few design tweaks, a revised range of engines and a raft of new interior tech for 2022.

Both the saloon and Touring estate models have been refreshed to make them tempting alternatives to the likes of the Audi A4 and the new Mercedes C-Class. The first new 3 Series deliveries could happen towards the end of the year.

You’ll be able to get the new BMW 3 Series with a range of petrol, diesel and hybrid engines. Every version comes with an eight-speed automatic gearbox, and four-wheel drive is available across many models in the range.

Entry-level 320i petrol models come with a 2.0-litre four-cylinder engine producing 184hp. Rear-wheel-drive models cost from £36,670 while four-wheel-drive cars will set you back an £38,220.

Check out these estate-car deals

M340d versions use a larger 3-litre six-cylinder engine to produce 340hp. These come with four-wheel drive as standard and cost from £52,965.

The new 3 Series is also available as a 330e plug-in hybrid that uses a petrol engine and an electric motor to produce 292hp. This version can drive for around 35 miles in electric-only mode.

If you aren’t a fan of BMW’s new huge front grilles, good news – the new 3 Series hasn’t been given a set of huge Bugs Bunny teeth like you’ll find on the M3 and M4.

Instead, BMW has tweaked the lower bumper to make it look more angular and added some new LED headlights with hook-shaped daytime running lights inside them.

Changes at the back are equally subtle. You’ll spot a piece of new, black lower bumper trim on some models with a more angular outline than before, but that’s about it.

The big news for the new BMW 3 Series is that it comes with the same vast infotainment screen as the BMW i4 electric car.

Check out these BMW i4 deals

This curved display consists of a 12.3-inch information display behind the steering wheel and a 14.9-inch touchscreen in the centre, but they’re joined in a way that makes them look like one seamless screen.

There are fewer buttons dotted around the cabin than you got in the previous 3 Series since you’ll operate most functions through the screen or by using BMW’s voice-controlled personal assistant.

BMW hasn’t just been busy tweaking the saloon – it’s also made the same changes to the practical 3 Series Touring estate.

It comes with the same visual upgrades on the exterior and you get an equally huge touchscreen with all the latest software features inside.

These include a front collision warning with automatic emergency braking, cruise control and speed-limit detection. Lane-departure warning, parking Assistant, and a 3D surround-view camera system are available if you’re happy to pay a bit more.

Check out the latest BMW deals available through carwow. If you’re ready to sell your car, see how easy it is to change your car with carwow and compare the latest new-car offers.