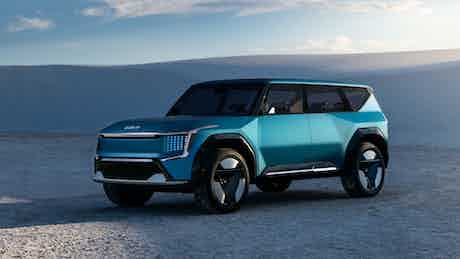 This is the new Kia EV9 SUV. It’s only a concept car for now, but it shows you what Kia’s upcoming seven-seat electric SUV will look like when it goes on sale in 2023. Read on for everything you need to know about this new electric car…

The new Kia EV9 has been confirmed for Europe in 2023. This concept car will be an electric alternative to large SUVs such as the Kia Sorento and Hyundai Santa Fe. It certainly has a bold design, and it promises to be packed with all the latest tech. Keep reading for all you need to know.

If you like your SUV to stand out, the Kia EV9 certainly ticks that box. It looks unapologetically boxy from every angle and its muscular haunches and blunt front end help it stand out more than any Kia currently on sale.

Looking at the front end, Kia hasn’t fallen into the trap of fitting massive grilles for the sake of it. Being an electric car, the EV9 has far less need for cooling vents than a petrol- or diesel-powered alternative allowing for a very clean look.

Instead of vents, the EV9 gets some cool-looking trims and contemporary pixel-like daytime running lights. It also gets a set of retractable roof rails that hide away when not in use to reduce drag.

The bonnet has a built-in solar panel that can generate some electricity from sunlight if you’re not near a charger. Down the side, the EV9 has a clean and modern silhouette with flared arches, bold creases and an obligatory set of huge alloy wheels.

These colossal rims will almost certainly be slightly toned down for production, though – shame…

This concept car has rear-hinged back doors that open up to reveal a pillar-less design, providing great access to the spacious interior.

Again, this is something that’ll probably never make it to the production car.

Around the back, the design is once again very minimalist. The rear lights have a slim look to them and the tailgate has a fuss-free flat-faced design.

Stepping inside, the Kia EV9 appears to be just as outlandish in the cabin as it is outside, however it’s unclear how much of this will make it into production.

The Kia EV9’s cabin is packed with sustainable materials. The floor mats are made of recycled fishing nets and the seats from recycled water bottles, which reduces the amount of pollution produced during the car’s construction and gives it a healthy handful of eco-friendly brownie points.

Check out the top 10 SUVs on sale

At the heart of this cabin is a 27-inch ultra-wide display that houses the infotainment system and the digital driver display. All the car’s functions – including the climate controls – are housed here.

The interior configuration of the Kia EV9 concept has three modes, Active, Pause and Enjoy. Active mode is for when you’re on the move, while Pause mode will rotate the seats to face each other when parked for a more lounge-like experience.

Enjoy mode rotates the third row of seats to face out of the tailgate when parked so you can take in your surroundings. Nice as it sounds, this is unlikely to make it into production.

No word yet on what’s powering the Kia EV9, but it has been confirmed to sit on the same underpinnings as the EV6 (shown above) — and could use many of its electronic components as a result.

If so, the Kia EV9 may come with a 77.4kWh battery that should provide close to 300 miles of range.

The Kia EV9 will likely come with a dual-motor all-wheel-drive setup, though don’t expect the same bonkers 585hp as comes in the Kia EV6 GT. That said, 325hp (like you get in mid-range EV6 models) should be plenty.

The new Kia EV9 is just a concept at the moment, but a production version has been confirmed for Europe in 2023.

Can’t wait for this new car to go on sale? Check out the latest Kia EV6 deals for offers on another great electric car, or check out the top 10 best EVs on sale now.