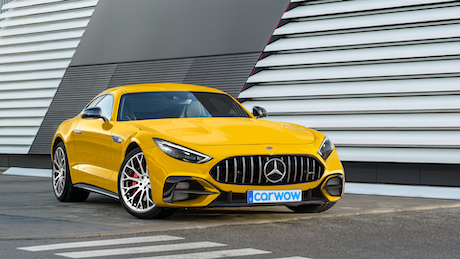 A new Mercedes-AMG GT is on the horizon, with the sports car set for V8 power and possibly a new hybrid system. Read on for full details.

A new version of the Mercedes-AMG GT is on the cards, with prototypes of the new sports car spotted undergoing testing.

Its set to share many mechanical bits with the recently-unveiled Mercedes-AMG SL, and will likely be revealed towards the end of 2022.

These exclusive renderings give you a first look at what the new Mercedes-AMG GT may look like when it’s revealed later this year. It’s clear to see that it’ll remain faithful to the current design, with enough tweaks to keep it looking fresh.

Check out the best sports cars on sale

The headlights are likely to change to a new swoopy design, similar to those found on the new Mercedes SL. The classic AMG panamerica grille looks set to stay as well.

The side profile remains the same as the current AMG GT, with an outrageously long bonnet and short rear end. It also appears to get new, wider wheel arches to accommodate the larger alloy wheels.

The back end almost looks like a carbon copy of the SL by the looks of the prototype.. Long, thin taillights appear and the exhaust exits have been pushed out pretty wide.

The new Mercedes-AMG GT is likely to share the same 4.0-litre twin-turbocharged V8 engine as the Mercedes SL Roadster. The AMG GT may make do without the lower-powered 476hp version found in the SL 55 and use the SL 63’s 585hp in its base form.

There’s the potential for hybrid power as well. Mercedes could look towards the expected setup for the new AMG GT 63 S E Performance (phew, what a name). This could see the standard car’s 585hp engine paired with a 204hp electric motor to develop close to 800hp.

Get more info on the upcoming AMG C63

All versions of the new Mercedes-AMG GT are expected to be offered with an all-wheel-drive system (borrowed from the new AMG SL) but it isn’t known if you’ll be able to specify a rear-wheel-drive only model. This may be saved for future track-focussed special edition GTs.

Four-wheel-drive AMG GTs may come with a drift mode, however, that mimicks the handling of a rear-wheel-drive car by sending 100% of the engine’s power to the rear wheels.

No images of the Mercedes-AMG GT’s interior have surfaced yet, but it’s likely to borrow the cabin from the SL63, albeit without the rear seats.

That would see a dashboard dominated by two massive screens. One serves as a digital driver’s display, with the other a portrait-set central infotainment system.

A new Mercedes AMG-GT could also mean a new bonkers Black Series model. The current AMG-GT Black Series has a 4.0-litre twin-turbocharged engine with 730hp and 800Nm of torque. If Mercedes were to give this the same hybrid power, that would mean potentially over 930hp.

This rendering gives you an idea of what an AMG-GT Black Series could look like. You can expect to see the huge wing, similar to the current car, as well as a much more aggressive bodykit for added downforce. Don’t expect to see this revealed anytime soon though.

It’s expected the new Mercedes-AMG GT will be revealed later in 2022, before arriving with customers in 2023.

Keen on a new sports car? Compare the best on sale today. If you’re looking to sell your car, you can now do that through carwow. Just upload a few pictures then relax as our trusted dealers come back with their best offers.