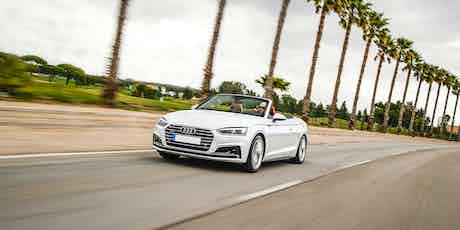 The previous Audi A5 Cabriolet is eight-years old now so the fact it still looks good is testament to its sound design. Seemingly no one told Audi that if something isn’t broke, don’t fix it, however, so the brand has launched this, the second-generation A5 Cabriolet. We had the pleasure of taking the range for a spin through the Andalusian countryside to see if the new one is any good.

Is it better than the old one?

This one’s easy… yes, and by a big margin. The old A5 Cabriolet took the coupe’s handsome styling but totally messed up the driving experience by lopping the roof off. Doing so introduced more flex into the body, compromising the accuracy of the controls and the suspension’s ability to properly control body movements. Thankfully, this has been comprehensively addressed in the new A5 with a body that’s up to 40 per cent stiffer and up to 55kg lighter than the old model.

All the A5s we drove had the optional adaptive suspension and, while there weren’t many potholes on the smooth Spanish roads we tested it on, the car demonstrated it had excellent body control while resisting lean and rounding off the edges of harsh bumps. All UK cars will have Audi’s comfort setup as standard or as a no-cost option which should be equally capable over bumps and well suited to life on our rutted roads.

The controls are, similarly, much improved over the old car. Where the previous model’s long steering rack made it feel sluggish in turns, the new model’s rack is much shorter. This means it feels more agile on the move, keener to turn into corners and requires less arm effort to manoeuvre. The steering itself is lovely – the car responds accurately and intuitively to turns while great on-centre accuracy means you needn’t make small corrections while going in a straight line. The steering doesn’t really have any ‘feel’ – very few modern cars do – but its intuitiveness means you’re unlikely to miss it.

Entry-level 2.0-litre 190hp petrols get a six-speed manual gearbox – we liked it in the four-door Audi A4 so expect it to be similarly good here. The cars we tested came with either a seven-speed twin-clutch automatic for mid-range engines or an eight-speed torque-converter auto for the powerful S5 and 3.0-litre 286hp diesel due in summer 2017. Both were well tuned, requiring only modest prods of the pedal to conjure swift, relaxing acceleration. The eight-speed was marginally smoother with the twin-clutch unit occasionally being indecisive on long uphill sections.

As befits the brand, quattro all-wheel drive can be fitted to all diesel models and the more powerful petrols. Unsurprisingly, the system bestows the car with phenomenal grip and the kind of all-weather dependability that certain rear-driven BMW and Mercedes rivals struggle to match. Like the potent S5, the most powerful 3.0-litre 286hp diesel can be fitted with an optional sports differential which you can feel makes a tangible extra effort to push the car through corners. That said, most normal buyers will see no benefit from it and keener drivers probably won’t buy the A5 Cabriolet in the first place.

Comfort, as mentioned, is excellent with the car isolating you from whatever broken road surface you have the misfortune to find yourself on while also avoiding feeling wallowy on the move. Refinement is equally impressive with very little engine or road noise making it into the cabin. Wind noise eventually builds up around the fabric roof but this only becomes noticeable at fast motorway speeds. With the roof down and all the windows up, it’s possible to have a conversation at motorway speeds without shouting although there’s only so much wind protection one can expect from a car with no roof.

Basic A5 Cabriolets come with either a 2.0-litre turbo petrol with 190hp or a 2.0-litre diesel also with 190hp. We were only able to try the diesel – expected to be the biggest seller in the range – and thought it was more than adequately powered. With an even spread of torque, it feels strong up to motorway speeds and is relaxed when overtaking. If, however, you want to be pushed into your seat a little more forcefully, the 252hp 2.0-litre petrol offers similar refinement and smoothness but with even more potency when you really floor it.

Possibly our favourite engine – the 286hp 3.0-litre diesel – isn’t due in the UK until the summer but might be worth the wait. It marries the potency of the petrol with the wide torque spread of the lesser diesel meaning it can catapult the A5 forwards with the kind of effortless shove usually reserved for high-end luxury cars. What’s more, the 3.0-litre unit simply refuses to make any noise unless you absolutely stand on the accelerator, at which point it merely lets out a refined whirr and spears towards the horizon with even more ferocity.

We also drove the more powerful S5 on the same roads and, while it’s quite obviously the fastest of the bunch, the other engines make such a convincing case for themselves that it’s hard to truly recommend it. In fact, the S5’s only saving grace is the fact that, at £51,835, it’s only a few thousand pounds more than the top 3.0-litre diesel so could be worth the extra outlay purely for the bragging rights if not the marginal performance hike. Petrolheads will naturally gravitate towards the S5 but, because the A5 works best as a cruiser, we’d suggest they consider the smaller, lighter Audi TTS.

So, yes – the A5 can be very fast if you choose the right engine but it’s simply not necessary. It feels most at home when driven smoothly and swiftly, cruising along in great comfort, refinement and luxury. You can drive the A5 Cabriolet hard and it’ll respond as gamely as it can but doing so simply feels out of character when it makes such a pleasant long-legged road tripper.

If you’ve read any Audi review before, you’ll probably be expecting the A5 Cabriolet’s cabin to be excellent and, well, it is. All the surfaces – even the ones you don’t usually see or touch – feel of great quality while there are no creaks or rattles from any trim pieces. The sense of quality even permeates as far as the switchgear with all controls giving a pleasing ‘click’ or ‘thunk’ when used.

Unlike the old A5, where the pedals were offset to one side, the driving position is far better – we’re yet to sit in a right-hand drive version but, based on our experience with the A4, we’d expect it to be much easier to get comfy than the old one. The climate controls are among the few actual buttons on the dashboard with everything else handled by Audi’s infotainment system which, thankfully, is operated using a proper knob on the centre console rather than the tricky touchscreens used in some rivals.

Like all recent Audi products, you can specify the Virtual Cockpit in place of the traditional instrument cluster. We’d strongly recommend ticking this option because it brings a sense of technological advancement not seen in the old model. It integrates with the sat-nav to put Google Maps satellite images behind the wheel, meaning you need only take your eyes off the road for a brief second to see the next instruction. When not navigating, it can simply show a big map or can be set to display the digital dials more prominently among a wealth of other functions.

The fabric roof has had more acoustic insulation built into it for the new model. This helps improve refinement in general while on the move but also makes the roof more insulated against extremes of heat or cold. It can be lowered in 15 seconds or raised in 18 at speeds up to 31mph and, unlike the outgoing version, you only have to push the button once rather than hold it down throughout the course of the operation.

So should I buy one?

It’s easier to recommend the A5 Cabriolet rather than the S5 Cabriolet – both are best suited to cruising swiftly in great comfort so it seems wasteful to get the S5 when the regular A5 engines provide more than enough power – especially the mid-range units. Equally, the A5’s lower cost means you’ve more money left over to fit options including the Virtual Cockpit digital dials and the lovely headroom heaters that warm the back of your neck with the roof down.

The Audi A5 Cabriolet makes a great case for itself so, if you’re in the market for a car like this, it should definitely go on your shortlist. Its admirable combination of a high quality cabin, an easy driving experience, plentiful power and upmarket image make it hard to ignore. It perhaps misses out on the last fraction of driving fun offered by the BMW 4 Series Convertible or the outright comfort of the Mercedes C-Class Cabriolet fitted with air suspension but, as a jack of all trades, the Audi might suit more buyers more of the time.