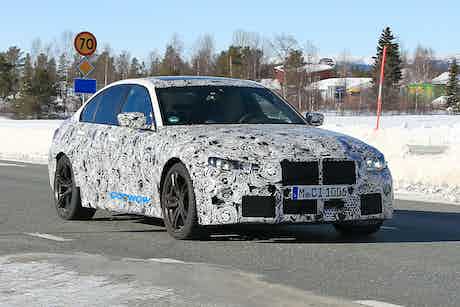 The new smokin’ hot BMW M3 has been caught undergoing testing again. Here’s everything you need about the latest version of the world’s most famous super saloon.

The upcoming BMW M3 has been spotted undergoing testing in Sweden.

Like most prototype vehicles, this BMW M3 wears eye-popping camouflage to disguise its finer details. Despite this, you can clearly see a lower, more aggressive front bumper with plenty of huge holes hacked into it to cool the engine and brakes. The 3 Series’ signature kidney-shaped grille remains, but this prototype features pre-production headlights that’ll be replaced by LED units in the finished car.

If you’re an uber-nerdy M3 fan, you’ll notice this new car doesn’t feature the old version’s signature door mirrors with aerodynamic fins, but it does at least come with the traditional quad-exhausts pipes. These will expel air through a new particulate filter designed to help the new M3 pass strict new emissions regulations. If you’re more interested in the sound they make, you’ll be glad to hear they’ll come with an adjustable exhaust flap which lets you switch between restrained and raucous volume levels at the touch of a button.

Pumping out everything from a subtle hum to a visceral howl will be a 3.0-litre twin-turbo straight-six engine with 480hp – the same basic engine that’ll see service in the new X3M and X4M. Not only will the new M3 be significantly more powerful than the old model, but it’ll also be 60kg lighter and available with xDrive four-wheel drive for the first time to help transmit more than 600Nm of torque to the road without frying the rear tyres.

It’ll also come with upgraded chassis stiffening to help it feel more responsive, an optional carbon fibre roof that’ll lower the car’s centre of gravity to make it feel nimble in the bends and adaptive damping that’ll let you flick between soft and hard suspension so you can use this super-sporty saloon every day.

The BMW M3 is expected to make its public debut at the Frankfurt motor show in September, costing from around £65,000.