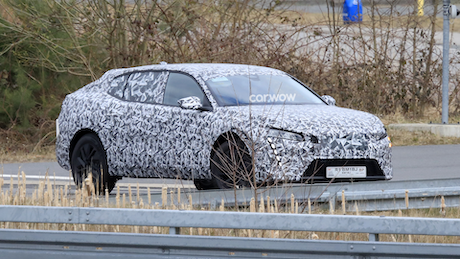 A new coupe SUV from Peugeot has been spotted testing, and it’ll be called the 4008. Read on for all you need to know.

The upcoming Peugeot 4008 has been spotted testing. This new Coupe SUV will offer an alternative to cars such as the Kia Sportage and Renault Arkana.

It’ll be the same underneath as the Peugeot 308, meaning it will be compatible with both conventional engines and plug-in hybrid options, and possibly electric power.

The new Peugeot 4008 will bridge the gap between the 308 hatchback and the larger Peugeot 3008 SUV. It appears to take design cues from both of these cars.

The whole car is heavily camouflaged at this stage, however you can still make out the slim headlights and ‘fang’ style daytime running lights, similar to other cars in Peugeot’s lineup.

It appears to have a lower bonnet line than the 3008. Combine this with the sloping coupe roofline and you have something with a much sportier profile than a traditional SUV.

The rear end is pretty well covered up, with just a portion of the LED rear lights on display. It’s a safe bet that Peugeot’s ‘lions claw’ style lights will make an appearance on this new model.

This means a modern design with Peugeot’s signature small steering wheel arrangement with the i-Cockpit digital drivers display set above it.

The Peugeot 4008 will be based on the 308 hatchback underneath, meaning it’s highly likely that they will share that car’s engines as well.

This means you could get a choice between a 1.2-litre petrol, 1.5-litre diesel and a plug-in hybrid. The petrol and diesel engines both put out 130hp, while the plug-in hybrid can be had with either 180hp or 225hp.

There may be a fully electric version as well at a later date, as is the case with the 308.

Pricing information hasn’t been released yet, however it’s likely to sit in between the 308 and the 3008. This means you can expect to pay around £26,000 for an entry-level Peugeot 4008.

Looking for a hassle-free way to change your car? Head over to carwow and you can sell your old car and get a great price on a new one, all from the comfort of your own home. Tap the button below to get started today.