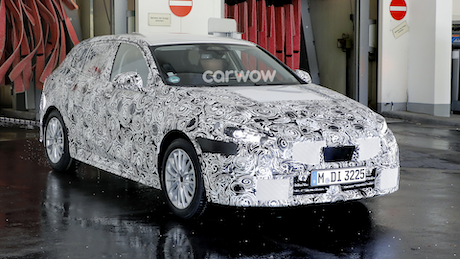 The new BMW 1 Series has been spotted testing, along with a high-performance M135i hot-hatch version. Read on for all you need to know.

The new BMW 1 Series has been spotted testing ahead of a possible reveal in 2023. The M135i hot hatch will also be updated with new looks and (potentially) more power.

This alternative to the Audi A3 and Mercedes A-Class could soon be offered with a choice of new plug-in hybrid engines and a selection of upgraded infotainment tech.

You’ll spot some new headlights peering through the prototype car’s camouflage in these images. Their overall shape isn’t likely to change, but they appear to feature new daytime running lights. The lowermost air intakes in the bumper are set to receive a few tweaks, too.

There isn’t much to report around the back, although you can see some new rear lights poking through this prototype’s camouflage wrap.

Compare the best hatchbacks on carwow

As for the new BMW M135i hot hatch, it looks like it’ll be getting a similarly subtle makeover, with the exception of four new exhaust tips in place of the current car’s two large pipes.

Nothing has been revealed about the engine updates for the new BMW 1 Series, but it’s likely you’ll get to choose from a similar range of petrol and diesel engines. No all-electric model is expected just yet.

A plug-in hybrid model may be introduced with this new version, however, and could use parts share with the BMW 2 Series Active Tourer. This larger, more practical people carrier uses a three-cylinder engine and an electric motor to produce a total of 321hp.

The new BMW M135i will likely retain the outgoing car’s 2.0-litre turbocharged four-cylinder engine (which it shares with the Mini Clubman JCW). Don’t rule out a slight increase in power compared with the 306hp you get in today’s M135i, however.

No images have surfaced of the new BMW 1 Series’ interior, but you can expect it to look very similar to the current car’s cabin.

The new car will almost certainly feature a few software upgrades for the infotainment system, however, and will likely come with a few new interior trim options to help you tell it apart from today’s 1 Series.

You can expect to see the new BMW 1 Series to make its public debut in late 2022 or early 2023 and go on sale soon after.

The new 1 Series may see a price bump over the current model, so expect to pay around £27,000 for an entry-level SE model with a 136hp petrol engine and a manual gearbox.

Can’t wait for this new car to go on sale? Check out the latest BMW 1 Series deals available now. You can also sell your car through carwow. It’s quick and easy, and you’ll get a great price from our trusted dealers. Tap the button below to get started.