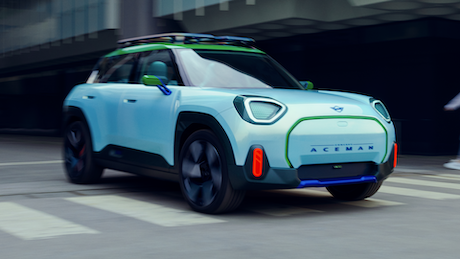 Mini has revealed the Concept Aceman, a new electric crossover to add to the brand’s EV lineup. Read on for all you need to know.

The new Mini Concept Aceman has been revealed. It’s a new electric crossover from Mini and previews a future production car that’ll be an alternative to cars such as the Peugeot e-2008 and Volkswagen ID3.

The new Concept Aceman is immediately recognisable as a Mini thanks to some design cues carried over from other models.

It has a very similar boxy profile to the current Mini Countryman, albeit with a few less rounded edges. The massive wheel arches on this concept are housing 20-inch alloy wheels, although these may not make it to the production version.

Up front, you have a similar grille design to other Minis, only now it’s blanked off (after all, there’s no engine back there in the Aceman). The rear is sporting some Union Jack tail lights, as well as a large roof spoiler.

The interior of the Mini Concept Aceman is where things get really funky. You have a lot of futuristic-looking suede materials, and Mini is very proud of the fact that there’s no leather to be found anywhere.

The layout is minimalistic, something which was inspired by the original Mini of 1959. All you have is a central, circular screen and a few toggle switches for things like the parking brake and gear selector.

There’s no word yet on what will be powering the new Mini Concept Aceman, however it’s unlikely to share the battery from the current Mini Electric hatchback.

That car has a 32kWh battery with a range of around 145 miles. Being a larger car, this likely wouldn’t be enough for the Aceman. Instead, this new model may use the 76kWh battery from the new BMW iX1

That car has around 272 miles of range. The Aceman may be smaller and lighter allowing for a slightly longer range than the iX1, possibly close to 300 miles.

Expect the new Mini Concept Aceman to debut as a production car at the beginning of 2024.

As for price, it’s a bit too soon for Mini to put a number on the Aceman. You can expect it to cost a fair bit more than the current Countryman though, somewhere around £40,000 is a safe bet.

Can’t wait for this new Mini Concept Aceman to go on sale? Check out the latest and greatest electric cars though carwow. You can also now sell your car through carwow, and it’s quick and easy.Tap the button below to find out more.