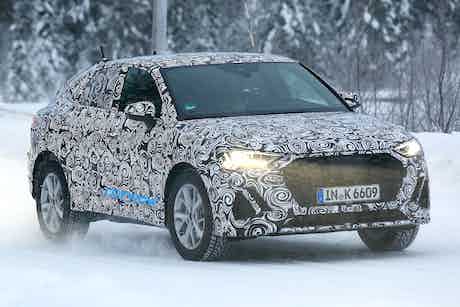 Audi will attempt to plug another niche with this, the Audi Q3 Sportback. Here’s everything you need to know about the company’s small coupe-style SUV.

So, you want a practical, midsize SUV but don’t want the dowdy image that comes with owning a boxy off-roader? You’re in luck – welcome to the 2019 Audi Q3 Sportback, a sleeker version of Audi’s Q3 SUV.

Styling then will be the main change and despite this test car being covered head to toe in camouflage, it’s clear that the Q3 Sportback will get a swept coupe-like roofline that’ll make it instantly recognisable from the Q3 that it is based upon. The changes go further than that though, up front the 2019 Audi Q3 Sportback is likely to get a sportier grille design with a honeycomb finish that contrasts the vertical rungs seen on the Q3. The thick grille frame seen on the Audi Q8 will also likely trickle down to the 2019 Audi Q3 Sportback and you can expect the car to get a sportier lower bumper that’ll add a hint of aggression to its front end.

The sloping roofline isn’t the only thing that’ll change. Around the sides of the car you can also expect it to get more pronounced, boxed haunches over the front and rear wheels to help differentiate it from the more vanilla Q3 – they’ll surround wheels that are larger as standard than the Q3’s to keep up that sporty look.

From the back, the 2019 Audi Q3 Sportback will be instantly recognisable by its rear light bar that stretches across the boot lid of the car – just like we’ve already seen in the larger Q8. Pay a little extra and you’ll be able to have it with LED lights that illuminate in sequence when you lock and unlock the car. Pointless, but cool nonetheless.

Even without paying extra, the 2019 Audi Q3 Sportback will come with indicators that light up sequentially in the direction the car is turning and below them, the Audi will have a sporty rear bumper complete with real exhaust pipes.

The downside of the sporty styling found on the 2019 Audi Q3 Sportback is that it won’t be quite as practical as the Q3. Rear-seat headroom is likely to suffer the most from the lower roof and those teardrop-shaped rear windows will also likely make the car feel a little claustrophobic from the back seat. Aside from this though, the Sportback will have the same high-quality fixtures and fittings, and full complement of infotainment screens found in the Q3.

And the same will be true for the2019 Audi Q3 Sportback car’s oily bits – they’ll be based on the Q3, but expect the bigger wheels and slightly lower suspension to make the car feel a tad sportier to drive. Grippy four-wheel drive will likely be standard and the Sportback is also tipped to get the pick of the Q3’s engine range, side-stepping the lower-powered models in favour of petrol and diesels with power ranging from 180-230hp.

Sign up to the carwow newsletter at the top of your screen to keep up to date with all the latest info on the Audi Q3 Sportback and every other new model on the way.