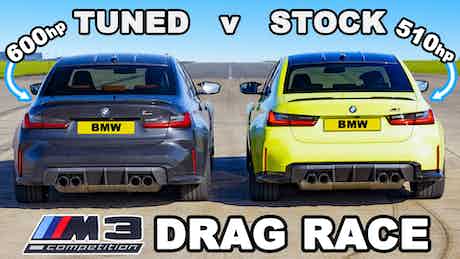 Is a stage one tune worth paying out for? Today we’re going to answer that very question with a showdown between two BMW M3s

Let’s start off with the standard BMW M3. It has a 3.0-litre twin-turbocharged straight-six engine with 510jp and 650Nm of torque. Both of these cars have an eight-speed automatic gearbox and all wheel drive, and both weigh in at 1,780kg.

So what’s different with the tuned M3? Well Wrench Studios have had a play with the engine control unit and have managed to re-programme it. Their car now puts out 600hp and 750Nm of torque.

So what difference does this bump in power really make? You’ll have to watch the video to find out.