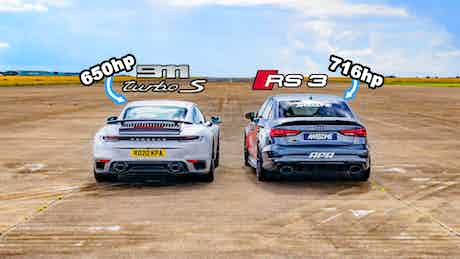 The new Porsche 911 Turbo S has proved itself the king of the carwow drag race. But, we’ve never pitted it against a tuned car before, so all that could be about to change as it squares up to an Audi RS3 with more than 700hp.

The Porsche 911 Turbo S is a ruthlessly efficient drag-racing machine. Its 3.8-litre twin-turbo flat six engines produces a huge 650hp and 800Nm of torque, which is channeled through one of the best eight-speed dual-clutch gearboxes in the business to an uber-grippy four-wheel drive system.

Porsche’s launch control is one of the snappiest around, too, and the 911 Turbo S’s super aerodynamic shape means it doesn’t run out of puff after the quarter mile.

So, it’s already beaten a McLaren 720S, a Ferrari 812 Superfast and a Lamborghini Aventador SVJ, so why have we lined up the all-conquering 911 Turbo S against an Audi RS3 Saloon with some stickers on it?

Well, this particular RS3 has had a colossal 716hp and 760Nm of torque massaged from its 2.5-litre turbocharged five-cylinder engine. So it should be pretty rapid.

The owner – and driver – of the RS3 says his car will do the standing quarter mile in less than 10 seconds. The fastest time Mat’s ever had out of a 911 Turbo S is 10.1 seconds – so it should be a very close race.

Watch the video to find out what happens.