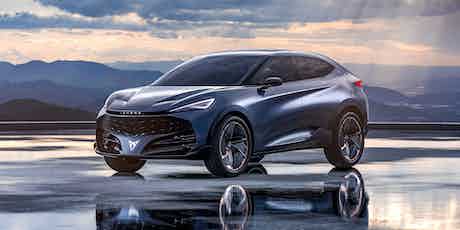 A Cupra Tavascan electric SUV is on the horizon – and it’ll look a lot like the striking concept car you see here when it goes on sale in 2024. Read on for more on Cupra’s upcoming electric performance car.

Remember the striking Cupra Tavascan concept car from the 2019 Frankfurt Motor Show? Cupra’s confirmed it’ll be going into production in 2024 as a sporty electric SUV alternative to the likes of the VW ID4, Skoda Enyaq and Kia EV6.

The Cupra Tavascan has yet to hit the road, but Cupra has confirmed it’ll look similar to the concept car shown in these pictures. That means the Tavascan should be quite striking to look at, thanks to details such as the aggressive headlights, the rakish roofline and a full-width rear lights on the boot lid.

Inevitably, there will be some elements – such as the 22-inch wheels and light-up Cupra badge – that’ll be reserved for top-spec cars. Despite this, even the entry-level Tavascan should still look sportier than the likes of a VW ID4 or Skoda Enyaq iV.

It’s very unlikely the Cupra Tavascan concept’s interior (shonw above) will make the jump from concept to road car unchanged. The core layout should stay the same for the most part, though – in particular the large central touchscreen, the digital instrument display and the design of the steering wheel.

The Cupra Tavascan concept only has four seats – you can expect the finished production car to come with five seats. Cupra hasn’t confirmed any interior dimensions for the Tavascan concept, though, but you can expect it to be similar in size to the VW ID4 and Skoda Enyaq iV, so there should be plenty of room inside for passengers and their luggage. The sloping roofline will likely eat into rear headroom, though.

The Tavascan concept had a 77kWh battery and a range of 280 miles – according to Cupra. That battery pack also powered a pair of electric motors (one driving the front wheels; the other for the rears.) Together, they produced a punchy 306hp that helped the car accelerate from 0-60mph in 6.5 seconds.

These stats are very similar to those of the upcoming Skoda Enyaq iV vRS – this car will share its battery and motors with the new Tavascan.

You’ll need to be patient if the Cupra Tavascan sounds like the electric family SUV for you because it’s not due to arrive in showrooms until 2024.

Because it’s still some way from going on sale, there’s no word yet on how much the Cupra Tavascan will cost. Based on the price of other similarly-sized electric SUVs such as the VW ID4 and Skoda Enyaq, you can expect prices to be in the £40,000 to £50,000 ballpark.

Can’t wait for the new Tavascan to go on sale? Compare the latest Cupra offers available through carwow or check out the top 10 best electric cars on sale.