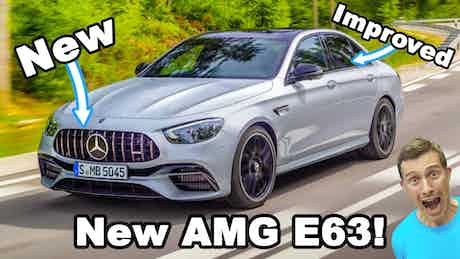 This is the new Mercedes-AMG E63. Well, ‘new’ might be over-egging things – it’s mostly just a nip and tuck upgrade – but it’s still the fastest E-Class Mercedes has ever made.

And you can bet it’ll be one of the very best all-round performance cars you can buy when it goes on sale later this year. Here are the carwow top 10 things you need to know about it.

Mercedes has updated the look of both the saloon and estate versions of the AMG E63. While you still have the same bulging wheel arches, lowered side skirts and massive air intakes as the old car, what is strikingly different is that grille. Instead of a horizontal bar behind the Mercedes badge, it gets the same Panamericana design as the AMG GT 4-door, the AMG A45 and the AMG GT. The grille outline also curves down instead of up – so it looks a bit angrier.

At the sides, you get 19-inch alloys as standard. But go for an E63 S model and you get bigger 20-inch rims.

Round the back, it gets the same new brake lights as the normal facelifted E-Class Estate. So, they’re flatter and make the whole car look lower and wider.

AMG’s 4.0-litre twin-turbo V8 is like the Swiss-Army knife of engines. They’ve managed to cram it under the bonnet of almost every Mercedes, from the C63, to the AMG GT. It also goes into Aston Martins now too.

The new E63 is just as fast as the old car. So, that means the standard E63 Estate will do 0-60 in 3.6 seconds. But the upgraded E63 S Estate is a smidge faster still. It’ll do 0-60 in 3.5 seconds. This practical, luxurious estate car is faster, then, than most sports cars.

Its top speed is pretty bonkers, too. Well, if you go for an S model, anyway. The regular E63 Estate is limited to 155mph – like pretty much all fast German cars. But, buy an E63 S Estate and you’ll be able to crack 180mph.

This model gets the same sportier bumpers, bigger wheels and lowered suspension as the estate. But it loses out on the bigger boot and boxy rear end. This means it’s a bit lighter. So it’ll do 0-60 0.1 seconds faster than the Estate in 3.5 seconds. If you go for an E63 S version then it’ll crack 60 in 3.4 seconds. That’s faster than a Porsche 911 Carrera 4 S. The E63 S saloon is the boss of them all, though. Get one of these, and you can blast past all the other company directors at 186mph – thanks to its superior aerodynamics.

A big German estate or saloon isn’t everyone’s idea of the perfect drift car. But, the old E63 proved everyone wrong, because it came with an actual drift mode. It worked by letting you turn-off the front-half of the car’s four-wheel-drive system. Just like in the BMW M5.

The new E63 gets the same 4MATIC selectable four-wheel-drive system as the old car. So it’ll be just as happy doing massive smokey drifts. But, Mercedes has tweaked the way the centre-differential sends power to the front wheels. So now it’ll be able to magic-up even more traction when you floor the accelerator out of a corner.

As you’ve probably guessed, the new E63’s cabin gets the same upgrades as the regular E-Class. So there’s the new centre console and the infotainment screens are now mounted behind one huge piece of glass – there’s no plastic bit in the middle.

The steering wheel is new, too. Now it gets the same cool dual-spoke design and touch-sensitive buttons as the regular E-Class. But, there’s some extra AMG badging and the awesome rotary driving mode switches. They’re just like the ones you get in a Porsche.

One of the biggest changes for the new E63 is to do with the infotainment system. The new car gets Mercedes’ latest MBUX infotainment tech. This has two massive 12-inch screens that look better than ever. And the whole system is even easier to use.

In fact, the simpler menus and responsive screens mean it’s actually a bit better than BMW’s iDrive. Also, the AMG gets unique performance data such as gear speed indicator, warm-up, set up, G-meter and a lap timer – so you can time a lap of your local Waitrose car park.

The sat-nav is especially cool. It works just like the one on the new A-Class where it shows huge direction arrows over a live video feed from the car’s bumper. So no more excuses for getting lost.

If your AMG E63 isn’t fancy enough, you’ll be able to pay extra for a few upgrades. First of all, there’s the optional AMG Driver’s Pack. This raises the standard E63’s top speed to the same as the more expensive S versions.

If you pick this, you should probably also check out the optional carbon-ceramic brakes. These are bigger and better at resisting fade at very high speed than the standard steel discs.

There are also a few new paint options to choose from. Two of these are just boring silvers and greys, but the car you see in the video comes in Brilliant Blue Magno. That’s a fancy way of saying satin blue, but it looks great. And it’s the same as the paint you can get on the even faster (and even more expensive) AMG GT 4-door.

Mercedes has given the E63 the same safety upgrades as the new E-Class. One of the best bits is a new cruise control system. This can accelerate, steer and brake for you on motorways. It’ll also automatically pull to the side to let emergency vehicles through and it uses sat-nav data to know when to slow down for junctions and bends.

There’s also something that Mercedes calls ‘Urban Guard’. It sounds a bit like a deodorant, but it’s more like a personal security guard for your car. The onboard cameras and sensors constantly monitor the car and they’ll alert you via the Mercedes Me App if someone bumps into it or tries to break in while it’s parked.

There’s also some extra blind-spot warning features that warn you if you’re about to swing your door out into a cyclist.

Mercedes hasn’t announced how much the new E63 will cost, but you can expect it to be just a bit more expensive than the old version when it goes on sale later this year. So, that means you’ll have to hand over at least £85,000 if you want an E63 Saloon, and a few thousand quid more for an E63 Estate.

Fancy an S model? Then you’ll need to hand over close to £100,000 for a saloon and even more for an Estate.