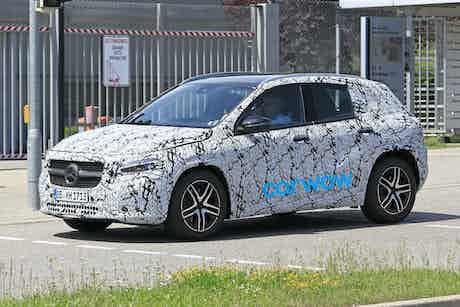 Our spies have spotted a prototype Mercedes GLA during testing. Here’s everything we know so far…

These spy pics of the 2020 Mercedes GLA show Mercedes is working on bringing yet another model to its A-Class family, a small SUV. With the A-Class, A-Class saloon, CLA, CLA SB and GLB all on (or nearly on) sale, you’d think Mercedes had squeezed everything it could out of its A-Class underpinnings, but it clearly feels there’s more to do.

The GLA was spotted testing in Stuttgart, Germany, and proves Mercedes thinks there’s room in its line-up for a jacked up family car to run alongside the taller, boxier GLB SUV.

The car in these pictures gets the usual floor-to-roof camo wrap, but you can tell it has a chunkier look than the standard A-Class. There’s raised suspension, a bluffer front end, taller roof and more pronounced hunches above the back wheels – helping it look more substantial.

To the bulkier body, you can expect Mercedes to add a Tonka-toy style body kit. That’ll be headed up by larger bumpers, with a mock skidplate up front, but you’ll also get plastic mouldings around the wheel arches, restyled side skirts and – as these pics show – roof bars that’ll make it easy to mount a roof box or bike rack.

Despite its more rugged appearance though, the GLA is more conventional car than SUV. As a result, most models will be front-wheel drive and use a variety of petrol and diesel engines from 1.3 to 2.0-litres in size  These will be mated to either a six-speed manual or a seven-speed automatic gearbox. That said, four-wheel drive will be an option on high-end versions, giving you more grip on slippery roads.

What’s likely to be of more interest to you, however, is that the GLA will have a little more interior space than the A-Class, with its higher roof translating into extra headroom and a cabin that feels airier as a result. You can also expect to get a boot that’ll swallow an extra small suitcase when compared to the A-Class.

That said, the A-Class’s infotainment system, complete with massive screens, will carry over unchanged – no bad thing because it’s one of the best. And you can also expect the GLA to be crammed full of the same posh touches – the turbine-style air-vents, expensive metal trims and cool mood lighting – that make the A-Class feel like one of the poshest cars you can buy for the money.

So if you like the sound of a car that’s more ‘SUV’ than an A-Class but not quite as much ‘SUV’ as a GLB it might be the car for you. Expect the new GLA to be revealed in full later in the summer with a price tag of around £27,000.

Bookmark this page to read the car’s full reveal when we have it.