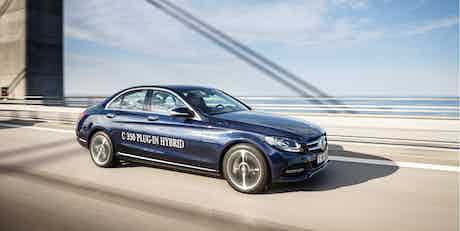 Mercedes has revealed images and details of its C 350 Plug-in Hybrid, which aims to help the manufacturer meet stringent EU emissions targets across the range.

The C 350 is the second hybrid in the C-Class range following on from the C 300 BlueTEC Hybrid, which was shortlisted for our best hybrid car award in 2014. The model will be available as both a saloon and an estate, and hopes to become one of the most efficient cars in its class.

Based on appearances, there is little to tell the Plug-in Hybrid apart from regular C-Class variants: the same smart styling remains inside and out. The only subtle tweaks come courtesy of some Hybrid badging and an updated instrument cluster inside.

So the powertrain is the interesting part then?

Yes, there’s a whole heap of clever stuff going on under the skin. Power comes courtesy of a 211hp, 2.1-litre turbocharged petrol engine complimented by a 60kW electric motor. In total, this endows the C 350 with a total output of 279hp and 443lb ft. The car can run on electric power alone for up to 19 miles, which with the help of a special wall box or a public charging point, can be recharged in about 1 hour 45 minutes.

Additional mileage is eked out thanks to regenerative braking, which uses wasted energy from braking and coasting to top up the batteries. This is achieved by the electric motor replacing the brakes during gentle deceleration.

The C 350 features an interesting piece of tech to help the driver to get the most out of the efficient drivetrain. The throttle pedal features haptic feedback, which sends a pulse through the pedal when it suggests you can back off the power to increase economy. It even combines with the radar-guided cruise control to allow you to come to halt in traffic in the most efficient way. Four separate driving modes can be selected for the drivetrain to make the best use of the battery’s charge in a variety of situations.

It gets even cleverer. To make the best use of the batteries, the C 350 can anticipate how to best use the energy systems over a given route, as long as your journey has first been programmed into the satellite navigation system.

The headline figures for all this wizardry? A claimed fuel consumption of 134.5mpg, with CO2 emissions of just 48g/km (49 grams for the estate version). Despite this economy, the saloon can still sprint from 0-62mph in 5.9 seconds, while the estate is 0.3 seconds behind. That’s the future right there.

Anything else I should know?

Mercedes say the batteries add around 100 kilograms to the overall weight. More of a concern for buyers is likely to be that they rob the C-Class of boot space. The saloon has had boot volume reduced to 335 litres and the estate is barely any better at 350. At least you’ll always be comfortable once inside. Thanks to Pre-Entry climate control, the C 350’s interior temperature can be pre-set before you get in via an internet-based system. Meanwhile, the standard air suspension should keep the ride nice and smooth for driver and passengers.

The exact prices and specifications have yet to be announced, while order books are due to open in summer 2016. A bit of a wait, but it should be worth it for what promises to be a swift, economical and beautifully made car.