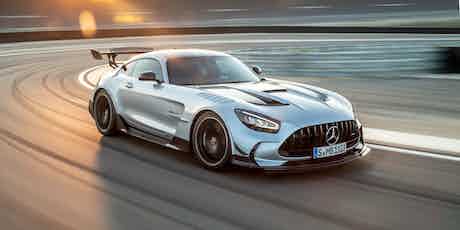 This new track-focused Mercedes-AMG GT Black Series is faster, more exclusive and more hardcore than any other model in the German brand’s range. Read all about it here, and watch Mat’s video review.

The new Mercedes-AMG GT Black Series looks a whole lot more aggressive than a normal GT, and that’s because it borrows from Mercedes’ GT3 racing car. There are also extra considerations given to cooling and aerodynamics, which affect the way the car looks – particularly on the bonnet.

There are vents all over the car, including on that huge bonnet and behind the front wheels to suck hot air away from the brakes when you’re driving hard on a race track.

At the back there’s a gigantic wing to create extra downforce, and the body kit around the whole car helps with that too. Loads of the extra bits are made from lightweight carbon-fibre.

The familiar 4.0-litre twin-turbo V8 from the rest of the AMG family (including the normal GT, as well as the E63 and others) has been updated and upgraded so much that it’s been given a new engine code: M178 LS2.

The main change in the design is the use of a flat-plane crank instead of a cross-plane crank in the other versions of this V8. This type of V8 is more often seen in Ferraris as it sacrifices the low-down torque of the classic V8 for extra horsepower at high revs.

There are lots more upgrades and technical details including new turbochargers and intercoolers but the thing you want to know is that it now has an astonishing 730hp and 800Nm of torque. It’s the most powerful V8 engine that AMG has ever put in a road car.

The new AMG GT Black Series uses aerodynamic technology from the brand’s GT3 racing cars, so it develops the kind of downforce at speed that’s usually reserved for track-only cars.

It’s actually possible to manually adjust the angle of the front splitter. There’s a Street setting for speed bumps and a Race setting for track days. There’s even some automatic movement in the splitter at speed to help improve downforce even further.

The huge rear wing is highly customisable, too: you can alter the main section manually with a toolkit, but there’s also up to 20 degrees of movement in the centre section that’s controlled electronically.

Set the driving mode to ‘Master’ and the wing stays put until a giddy 155mph. After that speed, the flap moves down to reduce drag, and the flap will come back up to improve braking using air resistance. The car can generate 400kg of downforce at 155mph, which pins it to the road – there are even chassis braces in the boot to stop the hatchback from being crushed by the air pressing down on the wing that’s mounted to it.

The new AMG GT Black Series is 35kg lighter than the AMG GT R Pro, so along with its new more powerful engine this means it will do 0-60 in less than 3.2 seconds.

If you can find a race track with a long enough straight, or you’re feeling particularly brave on the Autobahn, it’ll max out at a whopping 201mph.

The AMG GT Black Series gets similar racing-car suspension to the AMG GT R Pro, so you can manually adjust lots of the suspension geometry to suit whichever race track you happen to be at.

It also gets Mercedes’ adaptive dampers as standard that let you choose from Comfort, Sport and Sport Plus settings. Sport Plus is really only designed to be used on racetracks, but it has a clever feature that can measure the smoothness of the track surface and tweak its settings to maximise grip. Forged alloy wheels wearing Michelin Pilot Sport Cup 2 tyres that have specifically designed for this car are fitted as well.

The AMG GT Black Series gets a special nine-stage system lifted straight from the AMG GT3 race car. This works completely separately to the car’s ESP system so you can precisely control how much wheel slip you want without the brakes getting involved like they do in the regular GT.

The best bit is that it comes with a special orange dial right in the middle of the dashboard so you don’t have to go fiddling through some on-screen menus when you fancy some spur-of-the-moment wheelspin.

The GT Black Series gets a rear-mounted 7-speed dual-clutch automatic gearbox like the standard GT, but AMG’s beefed it up to handle the massive 800Nm of torque coming from its upgraded engine. They’ve also made it more responsive and changed the gear ratios slightly to work alongside the new V8 engine.

The standard GT’s gearbox made it a bit tricky to get off the line, but AMG’s given the new GT Black Series a revamped launch control system. AMG’s also added some extra cooling to make sure the gearbox doesn’t go bang after a few hard launches.

AMG’s also added some extra cooling to make sure the gearbox doesn’t go bang after a few hard launches.

The AMG GT Black Series gets a similar interior to other hard-core versions of the GT, such as the GT R Pro. For a start, there’s a set of really supportive bucket seats as standard, a flat-bottomed steering wheel and the same centre console with buttons laid out to look like cylinders in a V8 engine.

You also get a 12-inch driver’s display and a 10-inch central infotainment screen as standard. And, just like in the GT R Pro, you get special display modes specifically for use on racetracks – G meters and shift lights to tell you when to change gear, that sort of thing.

The AMG GT Black Series also comes with exclusive orange stitching that you don’t get on any other AMG GT. And you also get lighter fabric pull loops instead of solid grab-handles.

You can get the AMG GT Black Series with an optional Track Package. This adds a titanium roll bar, four-point harnesses and a fire extinguisher in the cabin – all stuff that’ll keep you safe should the worst happen. It’s standard on UK cars.

However, it’s not standard in the USA, Canada or China. This is because cars in those countries get less sporty seats which leave more space for your backside, but less room for a roll bar or a four-point harness.

Mercedes-AMG GT Black Series is already out and available to buy – if you’ve got a spare £335,000 sitting in your piggy bank. Mercedes is only going to build the car for one year, so get your order in quick if you want one.