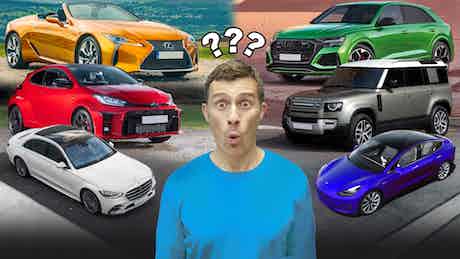 The UK’s finest new cars have been honoured in the 2021 carwow Car of the Year Awards. Read on to find out about the best cars you can buy today.

The carwow 2021 Car of the Year Award is voted for by the carwow Youtube audience. They chose their favourite car from a trio of models that have already won an award this year.

The Toyota GR Yaris is a fantastic little pocket rocket that put the biggest smile on my face from the first time I drove it. Our audience absolutely loves it too. It took an early lead in our Car of the Year poll and didn’t look back.

That’s three prizes for the GR Yaris in this year’s carwow awards – Best Hot Hatch, our special Thank You Award to Toyota boss Akio Toyoda for making the car, and now the overall carwow Car of the Year.

And as it was voted for by our five-million strong YouTube subscriber base, it’s truly the Car of the Year for car enthusiasts.

Tap on the awards below to find out more about each of our winners.

The 2008 makes every other small SUV look dull – and that’s even before you step inside. The interior feels high-tech and the quality is superb. The good news continues on the road, where the Peugeot 2008 is fun, feisty and efficient – what more could you want?

The GLB manages to look boxy, rugged and funky all at the same time, which is quite a trick. The good looks continue inside, and the tech is good – so long as you upgrade to the optional larger infotainment displays. It is a doddle to drive and the view out is great, too.

The Land Rover Defender has gone from being one of the oldest designs on the road to one of the most cutting edge. It’s large, luxurious and is still one of the best off-roaders you can buy. the sort of off-road abilities a snow leopard would find impressive.

The Range Rover manages the fabulous trick of blending the luxury of a Chelsea townhouse with the off-road ability of a mountain goat. And this PHEV version does it with CO2 emissions of just 75g/km, and an electric range of 25 miles.

The Audi RS Q8 is an SUV that can hit 60mph in just 3.8 seconds, sounding fabulous as it does so. Better still, it handles extremely well for its size, yet is supremely comfortable. It has loads of space for five adults, and the boot’s huge, too.

The Peugeot 208 is a simply brilliant small electric car. It looks great and the 200-mile range is more than enough for most, so you can live with it like you do a conventionally fuelled car. You’ll enjoy covering those miles, too, because the Peugeot e-208 is good fun to drive.

Volkswagen’s first standalone EV is a cracker. It’ll carry five people and their stuff, and it can do up to 340 miles on a charge. It’s quiet, has loads of standard kit and is great to drive, too.

Talk about under the radar. The Audi e-tron Sportback looks like a normal SUV but is actually one of the very best EVs out there. It’s hot-hatch quick yet it’ll do 240 miles between charges. It’s also super comfortable and super quiet – just what you want from an electric SUV.

The new Toyota Yaris has everything you want from a small car. It looks good, is easy to drive and it comes with loads and loads of standard kit. And because it’s a hybrid it does more than 60mpg. Can’t argue with that.

The BMW 330e is a posh plug-in hybrid car that’s perfect for families. The combined 2.0-litre engine and electric motor provide 292hp, which makes the BMW 330e quick and economical (as long as you charge it up regularly). It’s also great to drive, spacious and feels classy.

The Skoda Superb iV combines all the space of the standard Superb with the benefits of a plug-in hybrid. It emits just 30g/km of CO2 and return a claimed 149 miles per gallon.

The little Hyundai i10 provides big fun on a small budget, with perky engines, light controls and nippy responses; it makes light work of almost every journey. There’s more tech than you’d expect, too, with Apple CarPlay and Android Auto. There’s enough space for four adults (just) and most of their stuff in the boot, which is good going for such a dinky car.

The new Audi A3 Sportback looks great on the outside and has one of the sportiest-looking interiors of any Audi. The A3 also is really good to drive, and its engines are quiet and efficient.

The BMW 5 Series is just so good at everything it does. It manages to be comfortable and good to drive, on top of which it’s full of the latest tech and is a gorgeous place to spend time. Its wide range of engines is the icing on the cake.

The Skoda Superb Estate has an absolutely massive boot, packed with clever features. And that’s the whole point of an estate car, isn’t it? The 2.0-litre diesel engine is strong, smooth, and economical, there’s loads of standard kit and the Superb feels really well built. It’s a brilliant all-rounder.

The BMW 4 Series is a brilliant car. It feels great inside and it’s awesome to drive – just like a BMW should be. It looks sleek (that grille grows on you) and is better built than any other coupe.

This car just looks absolutely stunning. The Lexus LC is a truly brilliant convertible with a fabulous interior. So just sit back, fold down the roof and soak up the admiring glances as you burble past.

There are fast cars… and then there is the Porsche 911 Turbo S, which is faster than some supercars – but you can still use it every day. And who doesn’t want to commute in a car that can do 0-60 in 2.6 seconds!

The new Mercedes S-Class gets some of the most advanced technology ever seen in a luxury car. Its infotainment system is epic and it gets tons of cutting-edge safety technology. It’s more relaxing to drive – and be driven in – than ever.

The Toyota GR Yaris is an absolute gem. Its fizzy 1.6-litre engine pumps out a whopping 261hp and its four-wheel-drive system gives it the traction of a rally car.  It looks great too, and no other car has put a bigger grin on Mat’s face all year.

Peugeot is producing some of the most stylish, desirable vehicles out there right now. Its design is so on the money – inside and out. And, better still, the manufacturer is at the forefront of the electrical revolution, with a comprehensive range of electrified and fully electric vehicles.

Going by the amount of traffic it gets to our news pages, the forthcoming Volkswagen Golf R is going to fly out of showrooms. It is a 320hp German pocket rocket that will do 0-60mph in 4.7 seconds, helped by its standard four-wheel-drive system. In a very un-Volkswagen-ey move, it even has a ‘Drift’ mode.

Full details on the Golf R

Our YouTube audience loves Tesla, so much so it wins the Most Watched award for the second time – following its win in 2018. When a Tesla car is featured in a carwow video, it gets on average 4.5 million views. This outperforms the likes of Porsche and Lamborghini by some margin.

This is a special award to personally thank Akio Toyoda, boss of Toyota, for making car enthusiasts happy. For building the GR Yaris.

At a time when everyone is moving towards electrification – hybrids, EVs, fuel-cell cars – and autonomous driving, Toyota under Akio Toyoda’s leadership made a 261hp, four-wheel-drive, petrol-powered hot hatch for drivers.

Even with Toyota leading the field with these new technologies, it still developed the GR Yaris, which feels like a last hurrah for the Internal Combustion Engine. In this day and age, it’s a unique car, built from the ground up to focus just on driving fun.

Motoring journalists and car enthusiasts – all us petrol heads – have been waiting for so long for the GR Yaris, and now that it’s here… it didn’t disappoint. It wowed us.

So on behalf of car fans all over the world, we’d like to thank him personally for conceiving the GR Yaris project and seeing it through to deliver such a brilliant product. The GR Yaris makes us all happy.

Want to read all the latest news?