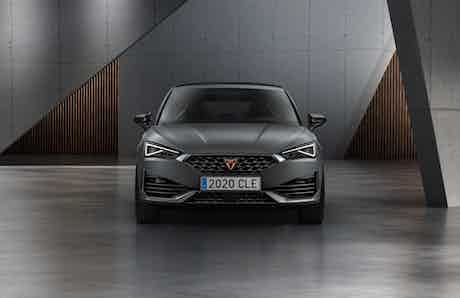 This is the all-new Cupra Leon – the latest hot hatch from SEAT’s Cupra performance brand. And it’s a bit like a Spanish version of the next VW Golf R. Here’s everything you need to know about it.

The new SEAT Leon Cupra isn’t actually a SEAT at all. It’s actually a Cupra Leon – just like the Cupra Ateca. So don’t go calling it a SEAT, Okay? Along with a new name, it gets some fancy copper details and a big tribal badge on the front bumper. Yeah, about that… It looks like a dodgy tattoo you might get on a stag night, but at least it means you can tell the Cupra apart from the new Leon.

The Cupra Leon gets the same edgy styling as the new SEAT Leon. So, it looks a bit sportier than the old model, but it doesn’t go all out like the mad Honda Civic Type R. There are big air intakes and a low splitter, plus new side skirts, lowered suspension and 19-inch alloys.

Depending on which engine you choose, you either get two or four exhaust pipes. There’s also a diffuser and a roof-mounted spoiler – which aren’t just for show. They actually help make the new Cupra Leon 8% more aerodynamic than the old car.

The new Cupra Leon gets pretty much the same cabin as the SEAT Leon. So it’s all very simple and very minimalist. There’s a big 10-inch infotainment screen, a digital driver’s display, and barely any buttons cluttering up the place. There is a new sports steering wheel, though, with a flat bottom, lots of copper stitching and some extra buttons – just like in the Cupra Ateca.

There’s more copper detailing on the air vents, too. And these are the same shape as the front grille – just in case you’d forgotten what that looks like. You also get some sports seats.

You won’t be able to get the Cupra Leon as a cool-looking three-door, like the old Leon SC. But you can get it as an estate. This load-lugger looks exactly the same as the standard five-door from the front. But, there’s no hiding its Kardashian-sized boot from the back.

At least you get the same cool brake lights as on the hatchback. Overall, there’s 30 litres more boot space than in the five-door, and its wider, lower opening should make it easier to load.

You’ll be able to get the new Cupra Leon with three petrol engines. They’re all 2.0-litre turbocharged four-cylinders. But, you can choose 245hp, 300hp or 310hp versions. The entry-level 245hp model will be a rival for the upcoming VW Golf GTI. But, unlike the VW, it’ll come as a five-door or an estate.

The same goes for the faster 300hp version. But you can only get the range-topping 310hp engine in the Cupra Leon ST estate. Just the thing for making quick tip-stops, rather than pit-stops.

Pretty much every other 300hp hot-hatch gets four-wheel drive as standard. After all, it helps to maximise grip when you floor the accelerator. Not the Cupra Leon. Pick a 245hp or 300hp model and all that power goes to the front wheels only – just like in the lairy Honda Civic Type R.

You do get an electronic limited-slip differential to help stop the front wheels spinning all that power away, though. And there’s a bunch of electronic stability programs to keep you pointing in the right direction. If you want the reassurance of four-wheel drive, there’s always the 310hp estate, which gets it as standard.

The Cupra Leon is one of the first hot hatches to come with hybrid power. This version is imaginatively called the eHybrid, and it gets a 150hp 1.4-litre petrol engine and a beefy 114hp electric motor. These work together to produce 245hp – the same as the entry-level 2.0-litre petrol car.

That might not sound like much, but the electric motor helps this hybrid pack a whopping 400Nm of torque. That’s the same as the range-topping 310hp Leon – who said hybrids had to be boring!? Not only will it be quick, but the electric motor lets you drive for up to 37 miles without using any petrol. A full charge takes three-and-a-half hours from a wall box, or six hours from a three-pin socket.

Whichever engine combo you go for, you get an automatic gearbox as standard. It’s a dual-clutch unit – just like in the old Leon Cupra, Golf R or Audi S3.