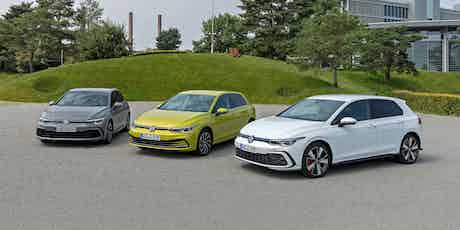 Five new versions of the Volkswagen Golf will be launched with hybrid power in 2020, but the UK won’t get all of them.

The latest Volkswagen Golf range is set to expand this year with five new models: three mild hybrids and two plug-in hybrids. It follows the launch of the Mark 8 VW Golf earlier in 2020, which was initially only available with petrol and diesel engines.

We already knew the Golf GTE was on the way, using a plug-in hybrid engine with a 1.4-litre petrol engine and an electric motor. There’ll also be a model called the eHybrid, but it’s not coming to the UK. A Volkswagen spokesperson said that this model is similar enough to the GTE – it uses the same engine, for example – that it wasn’t worth confusing buyers here in Britain.

The new Golf GTE has 245hp thanks to its combination of a petrol engine and an electric motor, which is the same power as the upcoming Golf GTI. Officially it’ll do 166.2mpg and emits just 38g/km of CO2, though in the real world that will depend on how regularly you can plug it in. VW says it has a range of around 39 miles in fully-electric mode.

The three mild-hybrid models are called eTSI. They all use a small electric motor and battery pack to supplement their petrol engines. They aren’t considered full hybrids because the engine always has to be running in order to drive, but the motor is used to capture energy when you brake that can then be used to lessen the strain on the engine when you accelerate, which improves fuel economy.

The first eTSI is already available. It uses a 1.5-litre petrol engine to produce 150hp and emit 130-134g/km depending on trim level. It’ll return up to 49.6mpg according to official tests. It costs from £26,400 in the UK. Another version will be added to the range in 2020, making the fourth of the five new models.

Finally, the new VW Golf eTSI range will be rounded off with a new version of the 1.0-litre petrol model, also using mild hybrid technology to reduce CO2 emissions and improve fuel economy and performance. This car produces 110hp, emits 98-102g/km of CO2, and returns 54.3-55.4mpg. As with all the electrified models on the way, a seven-speed dual-clutch DSG gearbox is standard.

Read our in-depth VW Golf review for more details or head over to our VW Golf deals page to check out the latest carwow offers.