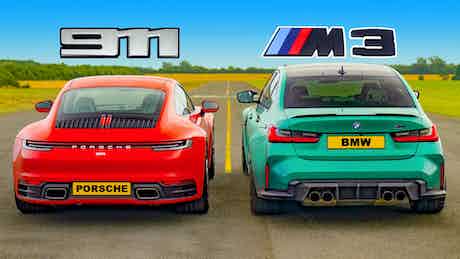 Could the BMW M3 be the ideal car if you want Porsche 911 performance on the drag strip, but need to drop the kids off on the way? Well in this drag race you can find out.

Let’s start with the Porsche 911 Carrera. It has a 3.0-litre turbocharged flat-six engine with 385hp and 450Nm of torque. This drives the rear wheels via an eight-speed dual clutch automatic gearbox. It’s also the lighter car of the two, tipping the scales at 1,505kg.

By comparison, the BMW M3 Competition weighs in at 1,730kg. To help make up for this, it has a 3.0-litre twin-turbocharged straight-six engine with 510hp and 650Nm of torque. This goes to the rear wheels via an eight-speed automatic gearbox.

Check out deals on a BMW M3

So will the added power give the BMW the edge, or will the lighter Porsche clean up? Find out by watching the video.