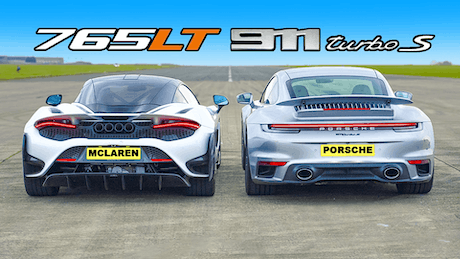 A new foe has appeared for the carwow drag race king, as the Porsche 911 Turbo S defends its crown against the McLaren 765LT.

If you’ve kept up with carwow drag races, you’ll know the Porsche 911 Turbo S has consistently decimated all but the absolute fastest (and much more expensive) production cars.

Powered by a 3.8-litre twin-turbo flat-six engine, it delivers its 650hp and 800Nm to an ultra-grippy four-wheel-drive system.

On a day as cold as today then, it may look a tough ask for the rear-driven McLaren 765LT to compete off the line. With 765hp and an identical torque figure to the 911 though, it may have enough grunt to overcome that.

Plus with a weight advantage — the 765LT tips the scales at 1,339kg compared with the Turbo S’ 1,650kg — there are enough weapons in the McLaren’s arsenal to compete.

Will the new challenger win the fight, or can the Turbo S hold off yet more competition? Well, you’ll need to watch to find out…

How to drive in snow safely: 10 top tips
10 best cars for students 2022
carwow 1/4-mile (400m) drag-race leaderboard
What is AdBlue?
Number plate retention guide
1944 Supermarine Spitfire review — 1,700hp V12 WW2 fighter flown!
What is engine remapping? A complete guide
BMW 3 Series vs 5 Series
6 best new car warranties in 2022
What is MPG in cars?
Top safest cars in the UK (2022)
10 ways to get better MPG
What to do with old car number plates
The 10 best used family cars
Registered keeper vs owner of a car