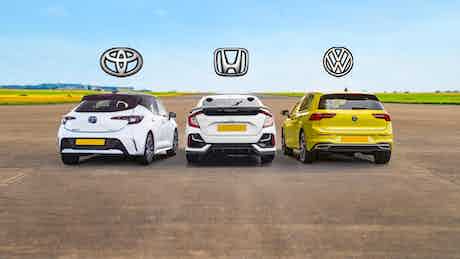 If you’re in the market for a new hatchback then you might be considering either the Toyota Corolla, Honda Civic or Volkswagen Golf. We decided to put them head-to-head in a three-way drag race to see which one would come out on top.

First up is the new Toyota Corolla, which has just recently returned to the UK having been temporarily replaced by the Auris. The Corolla GR Sport comes with a 1.8-litre petrol hybrid engine, which produces 120hp and 142Nm of torque, and drives the front wheels through a CVT automatic gearbox.

The Corolla least powerful car in this race and, thanks to the additional battery required for the hybrid system, it’s also the heaviest of the three cars, weighing in at 1400kg. The car is priced on par with the Golf and, in our car’s spec, will set you back £28,025.

Next up is the Honda Civic, which was first launched in 1972. The car has come a long way since then but the ethos remains the same – fun, affordable and reliable transport. The new Civic model is the lightest of the three cars racing, coming in at just 1300kg. It has the smallest engine in terms of displacement, it’s only a three cylinder 1.0-litre turbo petrol engine that’s joined to a CVT gearbox, but despite this it has more power on paper than the Corolla, producing 126hp and 180Nm.

Another plus point for the Civic is the fact that it’s the cheapest of all three cars racing, with the price of our car topping out at just £26,910.

Last but not least is the ever-popular Volkswagen Golf. The model racing here is the 1.5-litre four-cylinder turbo petrol engine, with mild hybrid system. It’s also front-wheel drive and while the Corolla and Civic both have CVT gearboxes, the Golf has a 7-speed dual-clutch transmission.

On paper, the Golf has the highest power output at 150hp and 250Nm but it’s also the second heaviest, tipping the scales at 1380kg. The car in our race costs approximately the same as the £28,000 Corolla.

Which of these three practical, front-wheel drive hatchbacks will cross the finish line first? You’ll have to watch the video to find out.