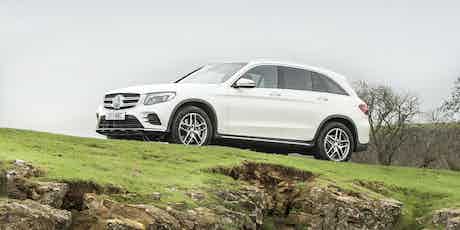 The popular GLC SUV will be the first Mercedes to feature Hydrogen power. It claims 300 miles to a tank and takes just minutes to refill

Mercedes has confirmed it will release a F-Cell hydrogen fuel cell-powered variant of the mid-sized GLC SUV within the next couple of years. We expect minor exterior modifications for the F-Cell over the conventional GLC (shown above).

In an interview with Autocar, head of Group Research and Mercedes-Benz Cars Development Thomas Weber confirmed the Stuttgart brand intends to remain at the forefront of hydrogen technology with the release of the GLC F-Cell. Weber says the F-Cell will feature the “newest fuel cell technology available” and should deliver a range of around 300 miles.

As Audi showcased with its latest h-tron concept, fuel cell technology is rapidly developing. As it becomes both more compact and efficient, it enables manufacturers to more easily package the technology within existing vehicles. As a result, the fuel cell in the GLC will fit in the space normally occupied by a regular internal combustion engine.

While battery electric cars have become much more popular in recent years, fuel cells carry one or two crucial benefits, most significantly in terms of refuelling. While full-EVs must be hooked up to a plug for several hours, hydrogen fuel cells can be refilled much like a regular petrol or diesel car in just a few minutes.

Weber goes on to acknowledge that “the technology has matured greatly in recent years, with improved packaging and efficiency, but it remains in its infancy and is still quite expensive by conventional driveline standards”. So, for now at least, the tech is only financially viable on larger, more prestigious cars within the range. It’s unlikely to feature on the B-Class any time soon – despite earlier concepts using the firm’s mini-MPV as a starting point – so eco-minded families might have a few years to wait.