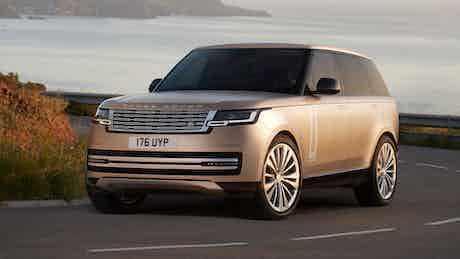 This is the fifth-generation Range Rover. It’s packed with new tech but stays true to the outgoing car’s iconic design. Read on for full details.

Plug-in hybrid versions of the new Range Rover are now on sale, along with high-spec SV models which can be had with a selection of engines.

This Range Rover may look similar to the old car, but it’s a real departure underneath — and it needs to be to keep competing with new alternatives like the Mercedes GLS and BMW X7.

Pricing has been confirmed for plug-in hybrid versions of the new Range Rover, as well as the high-spec SV.

Pricing for entry-level models remains the same at £94,400. Oh, and you can order one now

This Range Rover has a pretty familiar look to it. Squint slightly and you’d have a hard time telling it apart from the outgoing car.

Its headlights are near identical to the outgoing Range Rover, although they’re fitted with all-LED tech as standard across the range.

It does get a new front bumper design though, and posher SV versions get a model-specific grille design.

See that bit of silver trim ahead of the front door? You may be thinking it’s there to be functional, right? Well no, it’s just tacked on to fill a visual gap between the door and wheel arch.

There’s a short- and long-wheelbase version of the Range Rover, but visually speaking they’re pretty similar — albeit with a noticeably longer rear door on the long-wheelbase models (shown above.)

You’ll get 20-inch alloy wheels as standard, with the option of colossal 23-inch wheels. Apparently, the latter are no heavier than the old car’s 22-inch alloys.

The Range Rover sports a radical new look at the rear.

Ultra-thin brake lights are connected by a bit of translucent trim stretching the width of the boot. There are no visual exhaust pipes either — fake or otherwise –  and a subtle roof-mounted spoiler neatly covers the rear windscreen wiper.

The dashboard is covered by full-width air vents, and sitting in the centre of it all is a new 13-inch touchscreen infotainment system.

This houses Land Rover’s new Pivi Pro software, which not only supports wireless Apple CarPlay and Android Auto but Amazon’s Alexa, too.

Yep, you can control the lights in your house by talking to your Range Rover. Modern technology, eh?

As you’d expect, you’ve got a range of leather to pick from — here designed to be more like furniture in your home — but also a new fabric option that’s is said to emit less 75% CO2 when being produced than conventional leather. it contains wool, so it isn’t completely vegan friendly, though.

As standard, the Range Rover is a five-seater, but you can choose to fit long-wheelbase versions with an extra third row of seats for the first time to turn it into a seven seater.

You can pay extra to fit the middle row with 11-inch touchscreens (SV models get larger 13-inch displays) while the most luxurious four-seat versions come with a folding table and a fridge with built-in champagne flutes.

New as standard across the Range Rover line-up is an adaptive air suspension system that’s capable of self-adjusting to suit the road conditions. It’ll even link up with the sat-nav to predict surfaces up to 3km ahead and prep itself accordingly.

Rear-wheel steering is a new feature too, and that comes at no extra cost, plus all cars come with an active anti-roll system to help minimise body lean in tight corners.

Being a Range Rover, it should be pretty hand off-road too. It has a default ground clearance of 295mm, but if you need more, it can be raised by an extra 145mm.

There’s a new ‘wade’ feature too which jacks the car as high as it can go, closes interior air vents and locks the car’s differentials to help it transverse water. It’ll manage up to 90cm of the stuff, matching the new Land Rover Defender.

You’ve got a choice of petrol and diesel engines for the new Range Rover, as well as a pair of plug-in hybrids.

Both plug-in hybrid options use a 3.0-litre straight-six linked up to an electric motor. These P440e and P510e models both use a 38.2kW battery too, with a claimed electric-only range of up to 70 miles — exceeding the original estimate of 62 miles.

An all-electric version of the SUV is due to arrive in 2024 as well.

Can’t wait for the new Range Rover? Take a look at deals on the existing car or compare other SUVs on sale now