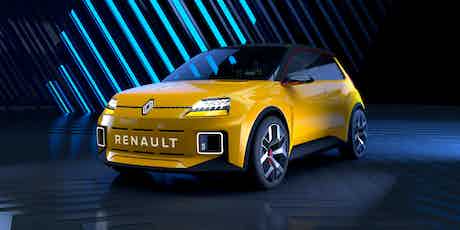 Renault has revealed a new electric car, called the Renault 5 Prototype. It previews a brand-new EV inspired by the classic Renault 5 hatchback. Read on for everything you need to know…

The new Renault 5 prototype has been revealed as a compact electric car with a more stylish retro design than the current Renault Zoe EV. This concept previews a production car that’ll go on sale in 2024 as an alternative to the likes of the Honda E, Peugeot e-208 and Mini Electric.

The new Renault 5 looks nothing like Renault’s other cars – whether they’re electric cars or powered by petrol and diesel engines. It takes inspiration from the boxy Renault 5 hatchback from the 1970s.

Rather than a swoopy curvy design such as the Renault Zoe EV, the new Renault 5 is all about angular edges and square details. From the front, you’ll spot a pair of huge square daytime running lights and a less-than-subtle illuminated Renault nameplate.

Things aren’t any less dramatic from the side, thanks to the Renault 5’s chunky wheel arches, thick black side skirts and contrasting red window frame. The hidden door handles (just like you get on a Tesla or Mercedes S-Class) are a nice touch, too.

Unlike the front-end, the Renault 5’s backside is very simple, with no fiddly details. You can be sure that the illuminated Renault nameplate will be covered by a numberplate on the production car, though.

One new image gives you an idea of what to expect from the new Renault 5’s interior. The headline feature is a free-standing glass infotainment display that displays instrument graphics right in your eye-line. Just like a massive head-up display.

The front-seat headrests also have illuminated rings on each side, suggesting they may have some form of built-in speakers.

The new Renault 5 will come with around 250 miles of range when it goes on sale in 2024. That’s around 10 miles more than you get in a top-spec Renault Zoe today.

You can expect the new Renault 5 to come with better fast-charging capabilities than today’s Renault Zoe, too.

Renault has confirmed it will launch seven new electric cars before 2025. The new Renault 5 will be one of these cars, along with a larger Megane-sized electric hatchback, as previewed by the Megane eVISION concept car, and a new crossover-style SUV called the Renault 4ever.

Renault has said that it plans to cut the cost of its future electric cars to account for potential future reductions in government plug-in car grants. In the UK, this grant currently gives you a £2,500 discount on a new Renault Zoe, bringing the price down from around £30,000 to closer to £27,500. It’s possible the new Renault 5 will set you back £27,500 before you factor in any grants when it goes on sale in 2024.

Compare the best electric cars on sale or check out the latest Renault Zoe deals for the best carwow offers on Renault’s excellent small electric car.