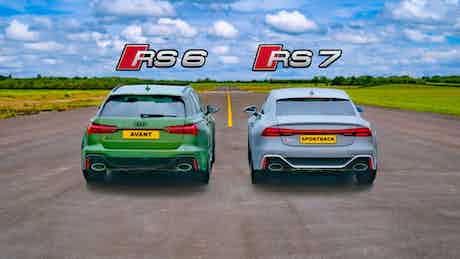 Often in a carwow drag race, it’s fine margins that separate the winner from the rest of the pack. It could be a little bit less weight, a smidge more traction or just a touch of extra torque that proves to be a crucial decider.

Well today, it’s going to take something extra special to separate the two cars in this head-to-head battle because the Audi RS6 Avant and RS7 Sportback we have here are almost inseparable.

Both of these supremely capable four-door Audis use the same 4.0-litre twin-turbocharged V8. Both develop 600hp and 800Nm of torque, both use the same launch-control-equipped automatic gearbox and both come with a clever quattro all-wheel-drive system.

Weight isn’t much of a factor in this battle, either. You might expect the RS6 to weigh significantly more than the sleek RS7 due to its estate body style, but that’s not the case. Just 10kg separates the two — with the RS7 weighs in at 2,065kg while the RS6 chalks up a mere 10kg more, at 2,075kg.

Check out our RS7 video review

On paper, then, it’s a deadlock. That said, these two twins aren’t racing on paper today — just think of the number of trees that would have to be chopped for that… Rather, they’re facing off at a properly soaked stretch of runway.

So, what separates the seemingly inseparable? You’ll have to watch the race to find out…