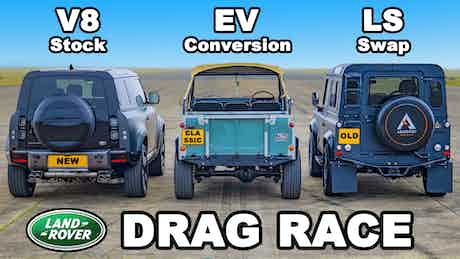 The Land Rover Defender was never famed for it’s straight line speed, however we’ve lined up three rather special mud-pluggers for a drag race.

In today’s drag race, Mat’s behind the wheel of an Arkonik Land Rover Defender. It has a 6.2-litre Chevrolet LS3 V8 engine pumping out 435hp and 475Nm of torque. This drives all four wheels via a six-speed automatic gearbox. It’s the lightest car here as well, coming in at 1,860kg.

Taking on this V8 brute, we have a Classic Land Rover Defender which has been converted by Electric Classic Cars with a Tesla drive unit. It has dual electric motors providing four-wheel-drive, as well as putting out 500hp and 675Nm of torque. It doesn’t weight much more than the Arkonik Defender either, tipping the scales at 1,930kg.

Finally, we have the new Land Rover Defender. It’s 5.0-litre supercharged V8 puts out 525hp and 625Nm of torque, which is put down through an eight-speed automatic gearbox and four-wheel-drive. It’s quite a bit heavier than the other two cars, 2,471kg to be precise.

So which car will come out on top? you’ll have to watch the video to find out.