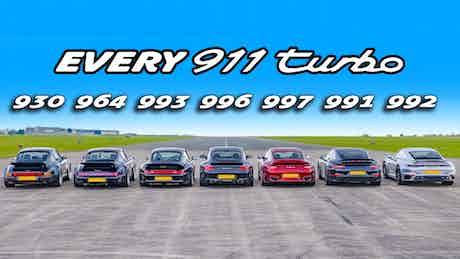 What’s the quickest Porsche 911 on sale? That’ll be the Turbo S. But, how does the latest 992 model compare to previous iterations of this supercar-beating turbocharged 911? Well, watch this drag race and you’ll find out…

We’ve pulled out all the stops to bring you every generation of the 911 Turbo, starting with the original 930, which was built between 1975 and 1989. This car’s powered by a 3.3-litre turbocharged flat-six that sends all its power to the rear wheels via a four-speed manual gearbox. The engine develops 300hp and 412Nm, and the whole car only weighs 1,310kg.

Mat’s sitting in the middle of this lineup, driving a 996 Turbo S from 2005. Fitted with a 3.6-litre twin-turbocharged flat-six that develops 450hp and 620Nm, the 996 sends its power through a six-speed torque converter automatic gearbox to all four wheels. All-in, it weighs 1,590kg.

Next to this car is a 997 Turbo S. This car has a twin-turbocharged 3.6-litre flat-six producing 530hp and 700Nm. This power finds its way to all four wheels through a seven-speed dual-clutch automatic gearbox. This version weighs slightly less than the 996 though, coming in at 1,585kg.

Finally, there’s the 992 – the carwow drag-race king. Weighing in at 1,640kg, the 992 uses the same engine as the 991, but it’s been uprated to develop 650hp and 800Nm. It’s paired with an eight-speed dual-clutch automatic gearbox that drives all four wheels.

This rather historic line-up of cars is our largest drag race yet. So, what are you waiting for? Watch the video to see how each car fares.

Looking for the easy way to change your car? You can sell you car and get a great deal on a new one, all from our network of trusted dealers and all from the comfort of your own home using carwow. Tap the button below to get started.