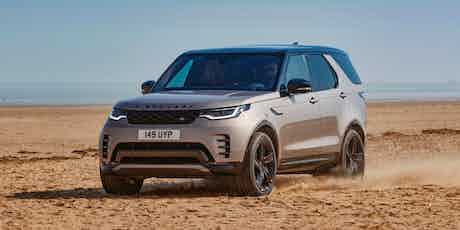 The new Land Rover Discovery has been revealed with a range of new engines, upgraded off-road tech and some subtly upgraded looks. Read on for full details.

The Defender isn’t the only Land Rover that’s new for 2021 – the Discovery has also been given a new lease on life thanks to a few upgrades to help it keep up with the likes of the BMW X5, Audi Q7 and Mercedes GLE.

The new Land Rover Discovery looks pretty similar to the old car, doesn’t it? Peek a bit closer and you’ll spot that the grille mesh is slightly different now, and the fake vent behind the front wheel isn’t silver like on the old car – it’s the same colour as the rest of the bodywork.

There’s some different trim on the bumpers and some new headlights with LED Matrix technology, but these aren’t exactly earth-shattering changes, though, are they?

It looks pretty much the same at the back, too, which is a real shame. Land Rover could have fixed that wonky off-set number plate once and for all, but instead, it just moved the Discovery badge onto a new bit of plastic trim. Oh well…

What is new, is the Discovery’s R-Dynamic trim level. This doesn’t change anything about the engines – so it’s not going to feel any sportier to drive – but you do get some new bumpers with different gloss black bits, a set of darkened brake lights and different alloy wheels. Speaking of which, the Discovery gets 19-inch alloys as standard, and top-spec cars get 22-inch rims.

The biggest change inside the new Land Rover Discovery is its all-new infotainment system. The old car came with a 10-inch touchscreen and some analogue dials, but now you get a 12.3-inch digital driver’s display and an 11.4-inch curved touchscreen on the dashboard.

These are all powered by Land Rover’s new Pivi Pro operating system, which can update itself automatically – so you never need to traipse back to the dealership to get the latest software. And, you get a wireless charging pad for your phone.

Besides a fancy new infotainment system, Land Rover hasn’t changed much about the rest of the Discovery’s interior. There is a new steering wheel, though, and the old car’s rotary gear selector is gone. Now you get a regular-looking gear lever. The old car’s three heating controls have also been binned, and now you get a pair of multifunction dials that control the air con and the heated seats.

You can still get the Discovery with 7 seats, just like the old model. And, the back two rows still fold flat so you can use your Discovery as a huge off-road van. Now, you can fold these seats down electrically using the touchscreen, rather than by pressing buttons in the boot.

Land Rover’s exterior designers probably didn’t put in any all-nighters coming up with the new Discovery, but some of the engineers did. It’s available with a load of new engines. For starters, there’s a new 3.0-litre inline-six diesel engine, which comes with 250 or 300hp. Both versions get a new mild-hybrid system as standard.

This isn’t a full hybrid system, so it can’t drive the Discovery in electric mode, but it does use a small electric motor to give you a boost when you accelerate. And, this motor works as a generator when you brake to charge up the Discovery’s batteries.

If you don’t fancy a diesel, there are also two petrol engines to choose from. There’s a 2.0-litre four-cylinder engine with 300hp, or you can get a 3.0-litre six-cylinder engine with 360hp. That latter gets with the same mild-hybrid tech as the new diesels. It’s also the fastest Discovery you can buy – it’ll do 0-60mph in 6.2 seconds.

Every new Land Rover Discovery comes with air suspension as standard. This helps it deal with bumps better than if it had suspension made from steel springs. It also lowers the car’s ride height automatically when you’re at motorway speeds to help improve stability and fuel economy – because when a car’s lower, it creates a bit less drag.

Besides the 250hp diesel model, every Discovery comes with adaptive dampers, too. These let you firm up the suspension in corners (so your passengers don’t feel car sick) and soften it when the road straightens out, to make everything more comfortable.

Unlike some posh SUVs, the Land Rover Discovery is actually designed to go off-road. It comes with 4-wheel drive as standard – obviously – but it also gets loads of new gizmos to help it cope with the muddy stuff.

One of the coolest bits is the Clearsight Ground View feature, which uses a front-facing camera to display an X-Ray view through the bonnet on the infotainment screen. It’s designed to stop you driving into massive rocks when you’re out in the wilderness, but it’s also really good at making sure you don’t scratch your alloy wheels on massive kerbs.

There’s also a wade mode, which lets you drive through 90cm of water without getting your feet wet – in case the Waitrose car park floods – and you can get the new Discovery with Land Rover’s latest Terrain Response 2 system. This probably won’t do you any good on the school run, but it’s super useful off-road.

It constantly adjusts all the car’s engine, gearbox, suspension and differential settings to make sure you don’t get stuck. It’s the same system you get in the new Defender, and it works brilliantly.

Lots of people who buy big SUVs need to tow heavy trailers, and the old Discovery was ideal because it had a huge towing limit. This new model is no different.

Besides the 4-cylinder petrol model, every Discovery can haul up to 3.5 tonnes. So, you’ll have no problems if you need to tow a horsebox, but your stallion has put on a few pounds during lockdown. And, there’s a tow assist feature to help you reverse large trailers into tight parking spots.

The new Land Rover Discovery is on sale now, priced from £53,090. This makes it a few thousand pounds cheaper than cars such as a BMW X5, an Audi Q7 or a Mercedes GLE.

Check out the latest Land Rover Discovery deals available through carwow or compare the best 4×4 cars on sale now.