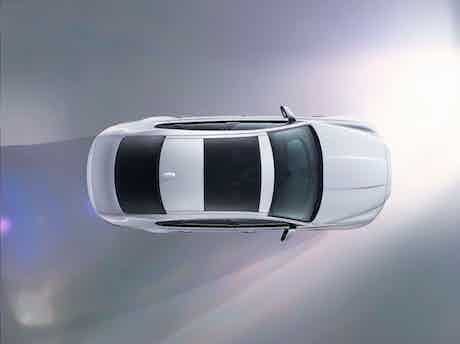 Jaguar’s brand image prior to the release of the XF was in a bad state of disrepair. The average age of its customers was increasing and its cars still looked exactly the same as they had done for the past 30 years. When the XF arrived, however, it blew away the cobwebs and set the marque on a course to modernisation.

Now, for 2015, Jaguar is readying itself to replace the XF and we’ve got our hands on the very first official (if slightly low-res) pictures. The snaps don’t reveal much but we’ve been hard at work making our best educated guesses about what you can expect from Jaguar’s upcoming executive cruiser. Here are the five things you need to know:

Jaguar’s director of design, Ian Callum, said he thinks the new XF “will be the best looking car in its class. Elegant, handsome and with proportions that imbue a great sense of integrity”. Looking at the top-down image, we can’t foresee a vast change in the design and, like its rivals, the XF is likely to go for an evolutionary restyle than a revolutionary one. Inside, the cabin is similar to the new XE’s featuring an elegant centre console and central infotainment screen.

Despite being visually similar to the car it replaces, the new XF will be completely new from the ground-up. It’ll be constructed from the manufacturer’s advanced aluminium-intensive architecture already employed on the new XE which should allow for a lightweight body with plenty of room inside for occupants and cargo.

From the new body to redesigned components, Jaguar is keen to stress the lightweight properties of its new car. Low weight helps almost all metrics – lowering fuel consumption, improving performance and reducing wear and tear on the suspension, tyres and brakes. Jaguar’s expertise in aluminium will certainly help here but, whatever you do, don’t crash it – aluminium is notoriously tricky to repair.

Nothing has been confirmed in the engine department but we’d be very, very surprised if it didn’t feature Jaguar’s new range of Ingenium turbocharged petrol and diesel 2.0-litre four-cylinder engines. The 197 and 237hp petrols and 161 and 177hp diesels could all make the move to the XF from the XE and, as before, more powerful engines will join later. These could be a larger 3.0-litre diesel, or a supercharged petrol V6 or V8 borrowed from the F-Type producing anywhere up to 542hp.

To launch the car, Jaguar, with the help of James Bond stuntman, Jim Dowdell will be performing the first ever high-wire water crossing in the car. The new car will drive across two 34mm wires suspended over water – this, according to Jaguar, will help demonstrate the lightweight and agile nature of the new XF.

Check out our review of the XF’s smaller brother, the XE, which will be arriving in dealerships very soon. Then take a look at the cars the XF needs to beat – the Audi A6 and Mercedes E-Class. Then head over to our car configurator to see how much you could save on your next car or to our car deals page to see our latest discounts.