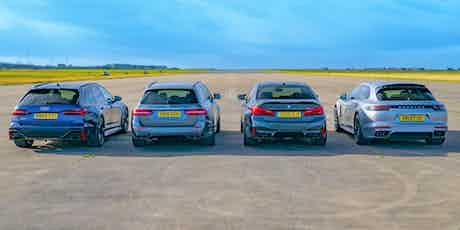 We’ve got an exclusive drag race with the brand-new Audi RS6! Can it beat the Mercedes-AMG E63 S and Porsche Panamera Turbo S E-Hybrid Sport Turismo estates, as well as the BMW M5 saloon? Read on and watch our latest video to find out!

This is the first time we’ve been able to get our hands on the magnificent Audi RS6 Avant for a drag race. Here’s the lowdown: it’s a mighty performance estate, powered by a 4.0-litre V8 engine – not to mention two turbochargers. As a result, it has some, quite frankly, silly stats going for it, like 600hp, 800Nm of torque and a 0-60mph time of just 3.6 seconds!

Watch it in action:

Then, because we wanted to up the ante even further, we added the BMW M5 to the mix. It’s got another twin-turbocharged V8, this time grunting out 625hp.What opponents would be worthy of taking on such a mean machine? Well, the Mercedes-AMG E63 S Estate and Porsche Panamera Turbo S E-Hybrid Sport Turismo instantly spring to mind. Like the Audi, these two are both rapid estate cars, each armed with a 4.0-litre, twin-turbocharged V8. The E63 has 612hp, while the Panamera gets a total 680hp, more than enough to give the RS6 a run for its money.

The four cars will face off against each other in three challenges. First up is the main event: your no-frills, quarter-mile, straight-line drag race. Then we have the rolling race, where we see which is the quickest to kick down when you put the pedal to the metal at 50mph. Last is the brake test – which car can come to a standstill from 70mph first?

Can the Audi overcome its three opponents? Or will its debut be spoiled by some very stiff competition? The only way to find out is by tapping the video above!

Although each car in this drag has an at-least-4.0-litre V8 engine alongside two turbochargers, their power figures differ quite noticeably. The Audi RS6 Avant, for a start, has 600hp, as well as 800Nm of torque. Meanwhile, the AMG gets 612hp and 850Nm of torque; the BMW has a slightly more impressive 625hp, but only 750Nm of torque.

However, it’s the Porsche Panamera Turbo S Sport Turismo that wins the mathematical sweepstakes. Its 4.0-litre, twin-turbocharged V8 generates 550hp and 770Nm of torque. Not that impressive by itself, but we’re using the E-Hybrid version, which gives the estate an electrical beefing-up. This means that, all in all, the Panamera has 680hp and 850Nm of torque, making it the favourite going in. But will the race actually play out like how the numbers suggest?

The BMW should prove the fastest of the bunch going from 0-60mph. It can reach that speed from a standstill in a seriously brisk 3.3 seconds. However, it is only the quickest car off the line by a very, very narrow margin. The Porsche Panamera will be hot on its tail, since it can reach 60mph in just 3.4 seconds. The Mercedes-AMG E63 S goes from 0-60mph in a close 3.5 seconds, narrowly edging out the Audi RS6 Avant and its 3.6-second time.

While the Audi, Porsche and Mercedes all have their own 4.0-litre, twin-turbo V8, the BMW M5 is the stand-out in terms of engines. It still has a V8 engine with two turbochargers, but is somewhat larger, with a 4.4-litre displacement figure.

Let’s not forget that the Panamera gets a hybrid system as well, giving it some extra juice. The electric motor alone adds 136hp and 400Nm of torque to the estate’s performance stats. However, there is a downside: the Porsche is by far the heaviest car of the four, weighing a gargantuan 2,400kg. The lightest of the bunch is the BMW M5, at 1,940kg. The Mercedes is just that little bit heftier at 2,060kg, while the Audi is 2,075kg. Just how big an impact will all this have on the final outcome of the race?

The Audi, BMW and Porsche have all been fitted with eight-speed automatic gearboxes. The Mercedes, on the other hand – still an automatic – has nine gears. This could play in its favour in the drag race and mean that the E63’s first gear is shorter than the other cars’, providing better off-the-line acceleration.

Starting at £140,868, the Porsche Panamera costs much more than its opponents. The car in this drag is even dearer at £166,428, due to options like 21-inch wheels and adaptive sports seats in the front.

Every car in this lineup has all-wheel drive, ensuring stronger grip on the track and improved acceleration. This also means less wheelspin and wasted momentum at the start line.

All-wheel drive also proves advantageous over two-wheel drive when you’re caught in adverse weather, like snow or very wet roads, seriously restricting how much you slide and skid.