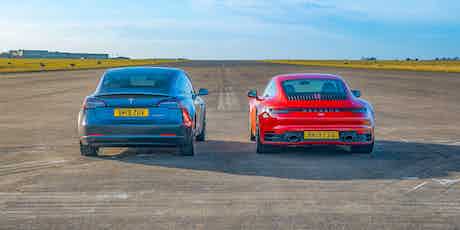 Do electric cars have what it takes to trump the best petrol-powered performance models? To find out, we put the Tesla Model 3 saloon against a properly tough opponent: the new Porsche 911.

Even in its humble Carrera S guise (at least in comparison to the range-topping, 650hp Turbo S model), the 911 is still a force to be reckoned with. Because its 3.0-litre, twin-turbo, flat-six engine produces 450hp and 530Nm of torque, the car can launch itself from 0-60mph in a supercar-fast 3.5 seconds and top out at 190mph.

To give the Tesla fighting a chance, the car you see here isn’t any old Model 3. Instead, it’s the sportiest Performance model. In this spec, the all-electric saloon has even more power and torque than the Porsche (490hp and 660Nm), which, in combination with its all-wheel-drive system, helps it storm to 60mph from a standing start in just 3.2 seconds. However, the Tesla does have one handicap: its weight. Tipping the scales at 1,847kg, the Model 3 Performance is not only quite a bit heavier than the 1,590kg Porsche, but also at a big disadvantage in the brake test, where both cars come to a stop as quickly as possible from 70mph.

So, does electric power come out on top, or is there enough petrol punch for the Porsche to win? Watch the video above to find out.