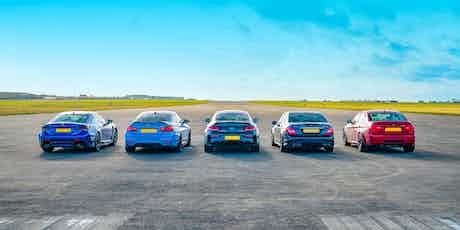 Three of the hottest high-performance coupes of the moment go head-to-head in carwow’s latest drag race – and some of their predecessors join in, too. Watch the video below to find out which car comes out on top.

Having plenty of power on hand is ideal when you’re drag racing, which means the Mercedes-AMG C63 S is the firm favourite in this contest. Its 4.0-litre, twin-turbo V8 is the most powerful engine here, producing an awesome 510hp, and it has the most torque too at 700Nm.

At 1,820kg, though, the C63 is also the heaviest car of the five by some margin. The motor-racing-inspired Lexus RC-F Track Edition, meanwhile, tips the scales at 1,760kg and the BMW M4 is even lighter still at 1,645kg. It’s not like the BMW and the Lexus are overshadowed by the Mercedes in the power stakes, either: the RC-F’s 5.0-litre V8 pumps out a healthy 477hp, and the M4’s 3.0-litre, turbocharged, six-cylinder engine develops a still-punchy 431hp.

To spice things up a bit, we’ve also brought along the direct predecessors of the BMW and Mercedes: the BMW M3 E92 and the AMG C63 W204. Though their engines aren’t turbocharged, they’re still very powerful (420hp for the BMW; 457hp for the Mercedes), so their current counterparts may not have everything their own way as they roar down the road.

So, which car comes out on top in this executive performance car shootout? And how do the older cars compare with their replacements? Watch the video above to find out.