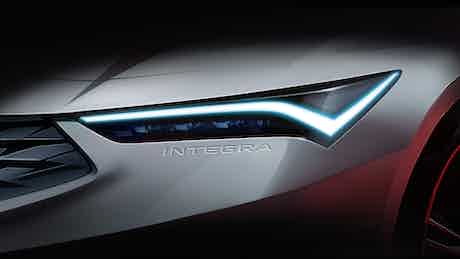 The Honda Integra is making a comeback, and rightfully as a two-door coupe. Read on for everything revealed so far…

A new Honda Integra is on the way. The ‘90s Japanese icon is set for a revival, and rather than recycle an iconic name for an SUV, Honda will be putting the Integra badge on a new two-door coupe under its Acura brand in the US.

No word just yet on if it’s coming to the UK, but keep your eyes peeled ahead of a full reveal in 2022.

So far, the only image of the Honda Integra revealed is this shot of a headlight, which gets a rather sharp daytime running light running through it.

You’ll spot the Integra embossing into the bumper too — a nod to the third-generation Integra seen in the ’90s — as well as the edge of what looks to be quite an imposing grille.

The new Honda Integra will be a two-door coupe and could take on a pretty sleek design approach as a result — particularly if the last car is to be mimicked.

It’s likely the Honda Integra will share plenty of parts with the new Civic, so expect an interior similar to that car.

That will include a large central touchscreen and digital dials, though Honda may go for some slightly racy tweaks if it’s to market the Integra as a sportier alternative to a Civic. These could include a flat-bottomed steering wheel, and potential some red or faux carbon fibre trim bits.

In global markets like the US (Where the Integra will be sold under the Acura nameplate) or Japan, it’s likely the new car will be sold with a range of petrol engines and potentially even a hybrid.

For the UK however, Honda could well replicate what it did with the last Integra and sell it as one model only.

That, back in 1998, was the Honda Integra Type R. Now, Honda hasn’t said this is definite but a huge part of Integra’s legacy is the hot variant.

It could be as simple as nabbing the 2.0-litre four-cylinder turbocharged petrol engine as the Civic Type R, which the new version of is expected to produce close to 350hp. If so, expect a six-speed manual gearbox too.

A new Honda Integra Type R would have huge boots to fill, though. The original is widely considered to be the best handling front-wheel-drive car ever.

Not just amongst its rivals, and not just of its period. The best ever. No pressure, then…

So far, the Honda Integra (or more apt for this bit, the Acura Integra) has only been confirmed for the US market.

Japan will surely get it too, but Europe — and the UK — remains a mystery.

If you want one, your best bet would be to get in touch with your local Honda dealer and really urge them to bring it here. If there’s demand, it may just happen…