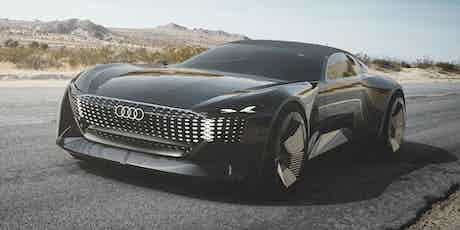 Audi’s latest concept is a roadster with clever lightning, autonomous technology and an adjustable wheelbase

You’re looking at the Audi Sky Sphere concept, a new roadster from the German manufacturer.

This new electric concept features autonomous technology and a clever adjustable wheelbase. It won’t go into production — at least not like this — but could serve as inspiration for future Audi cars.

Your first thought might be “why does this electric car have a massive grille?”

Well, that’s a fair point, because it doesn’t need one for cooling. This one, as Audi admits, is there for styling only — though it serves as a host for some really cool lighting tech.

See those LEDs scattered everywhere? They’re capable of displaying different patterns depending on if you’re unlocking and locking the car, or even walking away from it.

The car itself has some really dramatic lines throughout, such as those ultra-angular wheel arches, giving it a sort of Batmobile look.

Sitting in those arches are a set of 23-inch alloy wheels which look like they could well hypnotise you on the move.

At the back, there’s some more wild lightning with hundreds of red LEDs scattered across the back to serve as brake lights.

The Audi Sky Sphere is striking as you’re entering it, let alone once you’re sat inside. That’s because the doors are hinged from the back, just like those you’d get on a Rolls-Royce Dawn.

Once you are in, you’ll be hugged by a set of low-slung bucket seats that might seem more at home in a race car than a cosy grand tourer.

Despite that, Audi says they’re super comfortable thanks to loads of adjustment and a special microfibre upholstery.

Sustainable materials are used throughout the Sky Sphere. The door panels for example are made of eucalyptus wood, with a synthetic imitation leather used in place of the real stuff as well.

There’s a set of massive screens laden across the dashboard too, measuring 56 inches wide in total. As well as controlling most of the Sky Sphere’s functions, these can be used for conference calls and to watch films when you’ve got the car in autonomous mode.

Audi even says there would be exclusive concerts and sporting events for owners to watch inside the car.

The Audi Sky Sphere Concept is powered by a single electric motor that drives the rear axle.

No exact info on the batteries have been revealed, other than them being in excess of 80kWh in capacity and returning more than 311 miles of range on a single charge when in GT mode.

A level 4 autonomous system features on the Audi Sky Sphere, giving it the ability to drive itself in most driving conditions.

When this mode is activated, the steering wheel and pedals will fold away — giving you more spade to just stretch out and relax.

When you do feel like driving your Sky Sphere, and in a spirited fashion, you can switch it to Sport mode which does a little more than a conventional sport setting.

See, it shortens the wheelbase of the whole car, making it more agile as a result. That means you’ll be able to attack corners with a bit more vigour.

Before you get your wallet out, the Audi Sky Sphere won’t be entering production. At least not yet, or exactly like this anyway.

It’s possible Audi could be inspired to build an electric roadster which would no doubt be influenced by this concept. Maybe if you beg your Audi dealer enough…