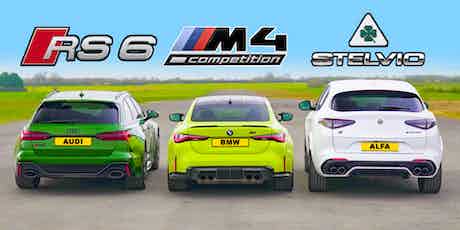 On the face of it, there should be one obvious, easy winner in a drag race between an Alfa Romeo Stelvio Quadrifoglio SUV, a BMW M4 Competition coupe, and an Audi RS6 estate. It’s the Audi, right?

With 600hp, 800Nm of torque (!) and quattro four-wheel drive to get it off the line, surely the Audi’s in the pound seats here? It’s a four-wheeled, leather-lined Exocet with space for a Labrador and the shopping. Job done.

Hold on there a second. Maybe not. You see the Audi’s got the firepower, but it’s packing a lot of weight. At 2,075kg, it’s giving away 245kg to the Alfa Romeo (in spite of the Alfa’s taller body) and as Lotus founder Colin Chapman always preached, weight is everything in racing.

The Q4 four-wheel-drive Alfa is down on power, on paper, compared to the Audi — 510hp and 600Nm of torque, but aside from its weight advantage, there’s something else to consider. The Alfa’s might 2.9-litre turbo V6 engine is essentially three-quarters of a Ferrari V8 (although Ferrari doesn’t much like to admit that) and when you’re going racing, surely it’s an advantage to have the might of Maranello on your side?

However, we’ve not yet considered the monster from Munich — the BMW M4 Competition. It has the same power as the Alfa — 510hp — but more torque — 650Nm — and at 1,730kg, it’s 100kg lighter than the Alfa, and a whopping 345kg lighter than the Audi. OK, so it has rear-wheel drive and not the four-wheel drive of both its rivals, but as well as being lighter, it’s lower and sleeker (those massive nostril grilles notwithstanding) and so will cut through the air rather better as the speeds rise.

So, who are you backing? Munich? Ingolstadt? Or Milan (via Maranello)? Only the stopwatch can give us the final verdict…